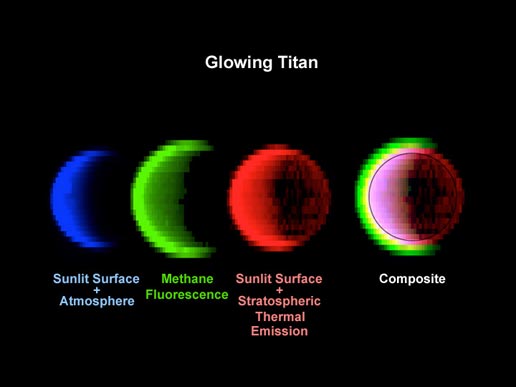 The glow of Titan's extensive atmosphere shines in false colors in this view of Saturn's gas-enshrouded moon acquired by the Cassini spacecraft visual and infrared mapping spectrometer during the July 2, 2004, flyby.

While flying over the terminator, where Titan's day and night meet, both the dayside and night sides are seen at various wavelengths. In these views of the crescent moon, the sunlit side is on the left and the nightside on the right. The blue image shows the sunlit crescent as observed at a wavelength that pierces through the thick atmosphere to show only the surface. This image is much smaller than the other three images to the right, because it does not show any atmospheric affects.

In contrast, the green image shows the immense size of Titan's atmosphere. This is revealed by the fluorescent glow of methane gas, which extends over 700 kilometers (435 miles) above the surface, showing that the atmosphere nearly doubles the size of Titan. This glow is at a wavelength of 3.3 microns, five times the wavelength visible to the human eye.

The red image shows that Titan also glows at night, which initially surprised scientists. The moon glows out to more than 200 kilometers (124 miles) in altitude, indicating carbon-monoxide emission at the 4.7 micron wavelength produced in Titan's relatively warm stratosphere.

The multicolor image on the far right combines the three previous images into one composite. Here it is seen that the carbon monoxide glow extends over the dayside as well, producing the yellow layer observed on the left. This is because the two glows, one from methane (green) and carbon monoxide (red) mix together to form yellow in this multi-color composite. Titan's surface is indicated by the circle. Titan's surface appears purple due to the mixing of the blue and red surface images.

The Cassini-Huygens mission is a cooperative project of NASA, the European Space Agency and the Italian Space Agency. The Jet Propulsion Laboratory, a division of the California Institute of Technology in Pasadena, manages the Cassini-Huygens mission for NASA's Science Mission Directorate, Washington, D.C. The Cassini orbiter was designed, developed and assembled at JPL. The visible and infrared mapping spectrometer team is based at the University of Arizona, Tucson.