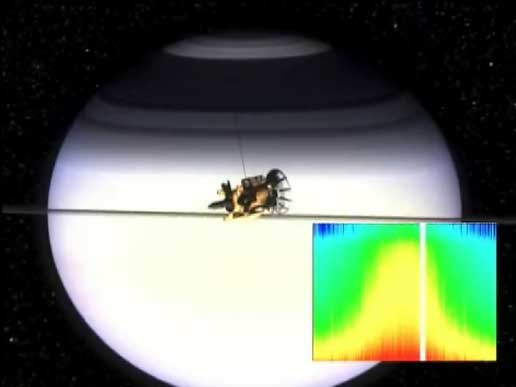 This movie shows the Cassini spacecraft as it flew in and out of Saturn's ring plane, with accompanying sounds recorded by Cassini's radio and plasma wave science instrument. On June 30, 2004, the spacecraft crossed the ring plane, where its high-gain antenna was bombarded with dust particles that produced this cacophony of sound reminiscent of a hailstorm. Exciting the rings produces similar sights and sounds, which are seen at the end of the movie.

The graph at the bottom of the movie corresponds to the sound waves, highlighting changes in intensity.

The Cassini-Huygens mission is a cooperative project of NASA, the European Space Agency and the Italian Space Agency. The Jet Propulsion Laboratory, a division of the California Institute of Technology in Pasadena, manages the Cassini-Huygens mission for NASA's Office of Space Science, Washington, D.C. The Cassini orbiter was designed, developed and assembled at JPL. The radio and plasma wave science team is based at the University of Iowa, Iowa City.

For more information about the Cassini-Huygens mission, visit http://saturn.jpl.nasa.gov and the instrument team's home page, http://www-pw.physics.uiowa.edu/plasma-wave/cassini/home.html .