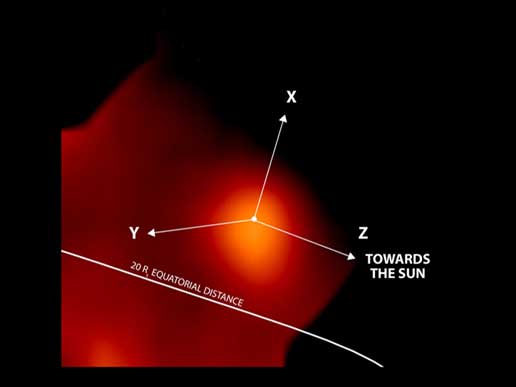 Images from the magnetospheric imaging instrument and the ion and neutral camera onboard the Cassini spacecraft reveal aspects of the interactions between Saturn’s dynamic population of hot energetic ions and the clouds of cold neutral atoms. Future observations may further explain the relationships between these interactions.

The most recent image of Titan reveals the emission of high-speed neutral atoms from a globular region approximately 70,000 kilometers (43,496 miles) in diameter, clearly centered on Titan. It is only 1/25 as bright as the region seen toward dawn during Saturn orbit insertion, even though Cassini is now closer to Titan. There is an extended emission region around the Titan cloud, but it is much dimmer than the Titan cloud itself and even dimmer compared to the emission seen in the dawn direction at orbit insertion. In this image, the X marks the direction toward the Sun; the Y marks the direction toward Saturn’s dawn; and the Z marks Saturn’s rotation axis. The dot in the center marks Titan.

The Cassini-Huygens mission is a cooperative project of NASA, the European Space Agency and the Italian Space Agency. The Jet Propulsion Laboratory, a division of the California Institute of Technology in Pasadena, manages the Cassini-Huygens mission for NASA's Office of Space Science, Washington, D.C. The Cassini orbiter was designed, developed and assembled at JPL. The magnetospheric imaging instrument team is based at Johns Hopkins University, Laurel, Md.

For more information about the Cassini-Huygens mission, visit http://saturn.jpl.nasa.gov and the instrument team's home page, http://sd-www.jhuapl.edu/CASSINI/index.html .