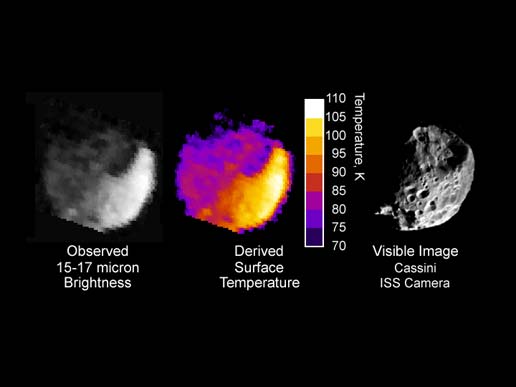 This image shows thermal radiation from the day and night sides of Saturn's moon Phoebe, taken by the composite infrared spectrometer onboard Cassini 1.8 hours before the spacecraft's closest approach to Phoebe on June 11, 2004. The left-hand panel displays the image in grayscale format, showing the brightness of Phoebe's radiation in the wavelength range 15-17 microns, which is about 25 times the longest wavelength visible to the naked eye. In the middle panel this brightness is used to estimate the surface temperature distribution across Phoebe. Temperatures are given in degrees Kelvin, and vary from a relatively toasty 107 Kelvin (-267 Fahrenheit), in the late morning near the equator (white, lower right), to less than 75 Kelvin (-324 Fahrenheit) in the northern hemisphere in the pre-dawn hours (dark blue, upper left). The "ragged edge" of Phoebe in this region is an instrumental artifact.

Temperatures are affected strongly by topography, as can be seen by comparison with the visible-wavelength image (right). Some of the coldest temperatures are found in the shadowed region inside the large depression in the northern hemisphere (upper right).

The Cassini-Huygens mission is a cooperative project of NASA, the European Space Agency and the Italian Space Agency. The Jet Propulsion Laboratory, a division of the California Institute of Technology in Pasadena, manages the Cassini-Huygens mission for NASA's Office of Space Science, Washington, D.C. The Cassini orbiter and its two onboard cameras were designed, developed and assembled at JPL. The composite infrared spectrometer team is based at NASA's Goddard Space Flight Center, Greenbelt, Md.

For more information about the Cassini-Huygens mission, visit http://saturn.jpl.nasa.gov and the Cassini composite infrared spectrometer home page at http://cirs.gsfc.nasa.gov/ .