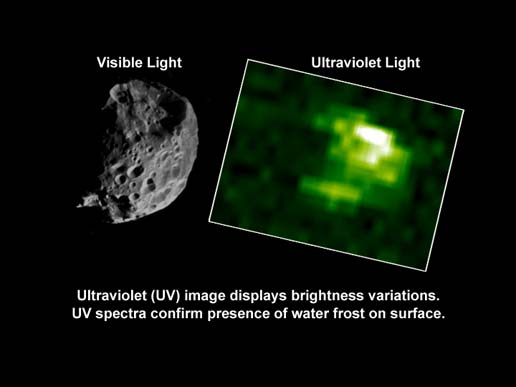 On the right, the ultraviolet image of Saturn's moon Phoebe, taken from a distance of 31,000 kilometers (about 19,263 miles) shows an irregular surface and bright crater region (white area). The bright areas indicate water frost on Phoebe's surface. The image was taken by Cassini's ultraviolet imaging spectrograph during the spacecraft's closest approach to Phoebe, on June 11, 2004. The large crater shows clearly in the image on the left.

The Cassini-Huygens mission is a cooperative project of NASA, the European Space Agency and the Italian Space Agency. The Jet Propulsion Laboratory, a division of the California Institute of Technology in Pasadena, manages the Cassini-Huygens mission for NASA's Office of Space Science, Washington, D.C. The Cassini orbiter and its two onboard cameras were designed, developed and assembled at JPL. The ultraviolet imaging spectrograph team is based at the University of Colorado, Boulder, Colo.

For more information about the Cassini-Huygens mission, visit http://saturn.jpl.nasa.gov and the ultraviolet imaging spectrograph at http://lasp.colorado.edu/cassini.