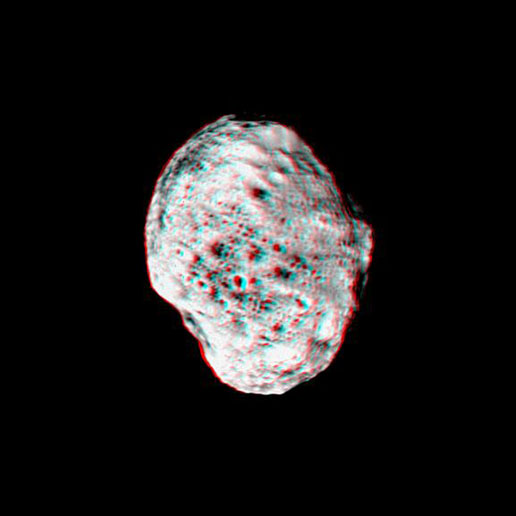 Saturn's moon Hyperion pops into view in this stereo anaglyph (or 3D view) created from Cassini images. Images taken from slightly different viewing angles allow construction of such stereo views, which are helpful in interpreting the moon's irregular shape.

Craters are visible on the moon's surface down to the limit of resolution in this image, about 1 kilometer (0.6 mile) per pixel. The fresh appearance of most of these craters, combined with their high spatial density, makes Hyperion look something like a sponge.

The moon's spongy-looking exterior is an interesting coincidence, as Hyperion's density seems to indicate that it is porous and much of its interior is filled with voids.

Dark material is concentrated in the bottoms of many craters visible here, perhaps resulting from the down slope movement of material, combined with sublimation of brighter ice.

The two images for this anaglyph were taken with the narrow-angle camera during a distant encounter with Hyperion on June 10, 2005. The views were acquired from distances ranging from about 176,000 kilometers (109,000 miles) using a spectral filter sensitive to ultraviolet wavelengths centered at 338 nanometers.

A separate, non-stereo version of the scene is included for comparison. A movie sequence from this encounter is also available (see PIA06243). The images have been contrast-enhanced to aid visibility.