Discovery of the Wavemaker (movie) 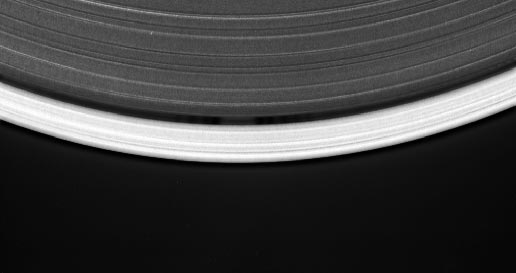 Cassini's celestial sleuthing has paid off with this time-lapse series of images which confirmed earlier suspicions that a small moon was orbiting within the narrow Keeler gap of Saturn’s rings.

The movie sequence, which consists of 12 images taken over 16 minutes while Cassini gazed down upon the sunlit side of the A ring, shows a tiny moon orbiting in the center of the Keeler gap, churning up waves in the gap edges as it goes. The pattern of waves travels with the moon in its orbit.

The new body has been provisionally named S/2005 S1.

Imaging scientists predicted the moon's presence and its orbital distance from Saturn after July 2004, when they saw a set of peculiar spiky and wispy features in the Keeler gap's outer edge. The similarities of the Keeler gap features to those noted in Saturn's F ring and the Encke gap led the scientists to conclude that a small body, a few kilometers across, was lurking in the center of the Keeler gap, awaiting discovery.

Also included here is a view of the same scene created by combining six individual, unmagnified frames used in the movie sequence. This digital composite view improves the overall resolution of the scene compared to that available in any of the single images.

The images in this movie sequence were obtained with the Cassini spacecraft narrow-angle camera on May 1, 2005, at a distance of approximately 1.1 million kilometers (708,000 miles) from Saturn. Resolution in the original image was 8 kilometers (5 miles) per pixel. The images in the movie sequence have been magnified in (the vertical direction only) by a factor of two to aid visibility of features caused within the gap by the moonlet.