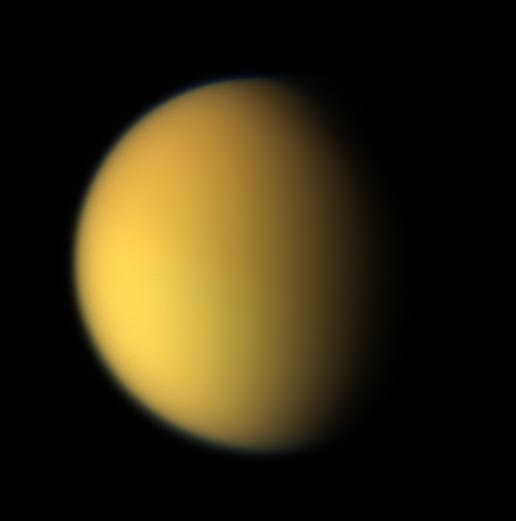 This natural color composite was taken during the Cassini spacecraft's April 16, 2005, flyby of Titan. It is a combination of images taken through three filters that are sensitive to red, green and violet light.

It shows approximately what Titan would look like to the human eye: a hazy orange globe surrounded by a tenuous, bluish haze. The orange color is due to the hydrocarbon particles which make up Titan's atmospheric haze. This obscuring haze was particularly frustrating for planetary scientists following the NASA Voyager mission encounters in 1980-81. Fortunately, Cassini is able to pierce Titan's veil at infrared wavelengths (see http://www.nasa.gov/mission_pages/cassini/multimedia/pia06228.html).

North on Titan is up and tilted 30 degrees to the right.

The images to create this composite were taken with the Cassini spacecraft wide angle camera on April 16, 2005, at distances ranging from approximately 173,000 to 168,200 kilometers (107,500 to 104,500 miles) from Titan and from a Sun-Titan-spacecraft, or phase, angle of 56 degrees. Resolution in the images is approximately 10 kilometers per pixel.