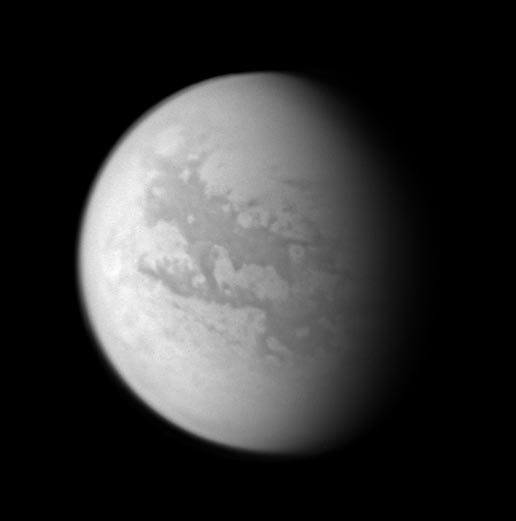 This image composite was created with images taken during the Cassini spacecraft's closest flyby of Titan on April 16, 2005. Cassini's cameras have numerous filters that reveal features above and beneath the shroud of Titan's atmosphere.

This monochrome view shows what Titan looks like at 938 nanometers, a near-infrared wavelength that allows Cassini to see through the hazy atmosphere and down to the surface. The view was created by combining three separate images taken with this filter, in order to improve the visibility of surface features. The variations in brightness on the surface are real differences in the reflectivity of the materials on Titan.

North on Titan is up and tilted 30 degrees to the right.

These images were taken with the Cassini spacecraft wide angle camera on April 16, 2005, at distances ranging from approximately 173,000 to 168,200 kilometers (107,500 to 104,500 miles) from Titan and from a Sun-Titan-spacecraft, or phase, angle of 56 degrees. Resolution in the images is approximately 10 kilometers per pixel.