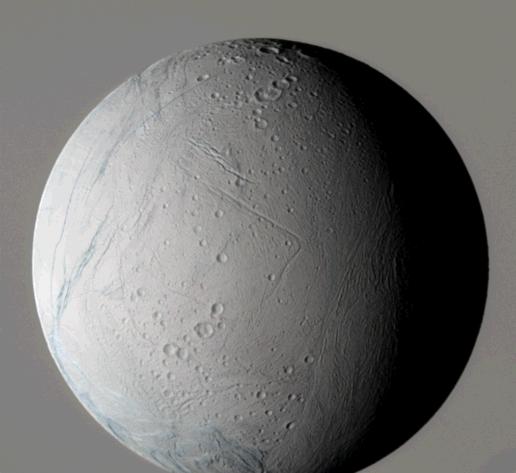 During its very close flyby on March 9, 2005, the Cassini spacecraft captured this false-color view of Saturn's moon Enceladus, which shows the wide variety of this icy moon's geology.

Some geological regions on Enceladus are old and retain large numbers of impact craters; younger areas exhibit many generations of tectonic troughs and ridges. Subtle differences in color may indicate different ice properties, such as grain sizes, that will help unravel the sequence of geologic events leading to the current strange landscape.

This false-color view is a composite of individual frames obtained using filters sensitive to green (centered at 568 nanometers) and infrared light (two infrared filters, centered at 752 and 930 nanometers respectively). The view has been processed to accentuate subtle color differences. The atmosphere of Saturn forms the background of this scene (its color has been rendered grey to allow the moon to stand out).

The Sun illuminates Enceladus from the left, leaving part of it in shadow and blocking out part of the view of Saturn. This view shows the anti-Saturn hemisphere, centered nearly on the equator.

The images comprising this view were taken with the Cassini spacecraft narrow-angle camera at a distance of approximately 94,000 kilometers (58,000 miles) from Enceladus and at a Sun-Enceladus-spacecraft, or phase, angle of 48 degrees. Resolution in the image is about 560 meters (1,800 feet) per pixel.