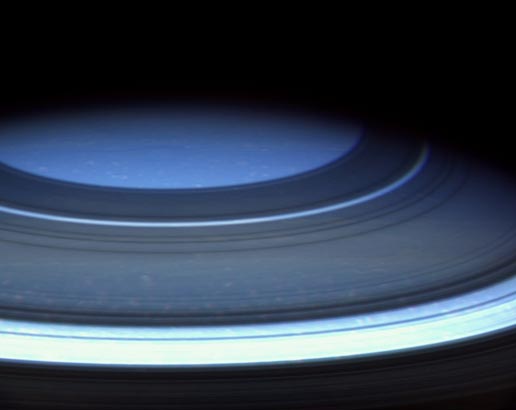 Saturn's northern hemisphere is presently a serene blue, more befitting of Uranus or Neptune, as seen in this natural color image from Cassini.

Light rays here travel a much longer path through the relatively cloud-free upper atmosphere. Along this path, shorter wavelength blue light rays are scattered effectively by gases in the atmosphere, and it is this scattered light that gives the region its blue appearance. Why the upper atmosphere in the northern hemisphere is so cloud-free is not known, but may be related to colder temperatures brought on by the ring shadows cast there.

Shadows cast by the rings surround the pole, looking almost like dark atmospheric bands. The ring shadows at higher latitudes correspond to locations on the ringplane that are farther from the planet – in other words, the northernmost ring shadow in this view is made by the outer edge of the A ring.

Spots of bright clouds also are visible throughout the region. This view is similar to an infrared image obtained by Cassini at nearly the same time (see http://www.nasa.gov/mission_pages/cassini/multimedia/pia06567.html). The infrared view shows a great deal more detail in the planet's atmosphere, however. Images obtained using red, green and blue spectral filters were combined to create this color view. The images were taken with the Cassini spacecraft wide angle camera on Dec. 14, 2004, at a distance of 719,200 kilometers (446,900 miles) from Saturn. The image scale is about 39 kilometers (24 miles) per pixel.