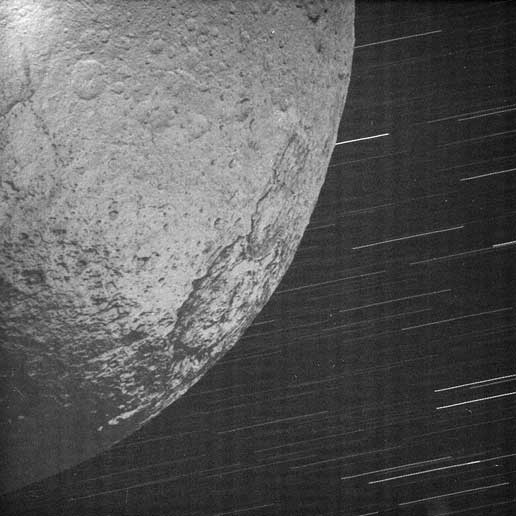 This almost surreal view of Iapetus was acquired by Cassini about 10 minutes after the spacecraft's closest approach to the icy moon during a close flyby on New Year's Eve 2004.

The image shows Iapetus' surface illuminated by reflected light from Saturn (not by the Sun) and is the highest resolution view acquired to date of this part of Iapetus' surface.

Compared to the approximately one second exposure times used for imaging Iapetus' sunlit side, this view required a very long exposure time of 82 seconds. Cassini was designed to pivot while moving in order to keep its cameras and other remote sensing instruments pointed 'on target' with great precision. Consequently, despite the large relative speed between Iapetus and the spacecraft during this long exposure – about 2 kilometers per second or almost 4,500 miles per hour at closest approach – the image of the moon's surface is un-smeared (although the background stars are smeared).

This image reveals a heavily cratered surface and shows the boundary between Iapetus' bright trailing hemisphere and Cassini Regio – a large, dark region that covers the leading hemisphere of the moon's surface. Some of the dark material appears to have collected inside the rim of a large impact structure about 250 kilometers across (155 miles) that lies just beyond the edge of the dark region (seen here near the right of the image). NASA's Voyager images (see http://photojournal.jpl.nasa.gov/catalog/PIA02268) this feature appeared as a dark 'moat' and had been hypothesized to be an impact structure. The recent images from Cassini confirm an impact origin for this feature.

In contrast, the origin of the dark material is currently unknown and the recent images have sparked exciting debates among Cassini imaging scientists. Some characteristics of the dark region revealed in this and other images taken during the encounter suggest that dark material from elsewhere in the Saturnian system – perhaps the result of an impact on another nearby moon – has coated this side of Iapetus with a relatively thin layer. However, an internal origin for the material has not been ruled out and, if correct, may be related to the long equatorial ridge discovered in Cassini images to span Cassini Regio.

Regardless of its origins, the dark material appears to lie on top of other geologic features seen on Iapetus thus far, implying that the event which formed the dark coating occurred later in Iapetus' history. A closer encounter with this moon later in the Cassini mission (September 2007) may reveal more detail and help answer the question of the origin and age of the dark material on Iapetus.

The image was obtained in visible light with the Cassini spacecraft narrow angle camera on Dec. 31, 2004, at a distance of about 123,370 kilometers (76,659 miles) from Iapetus. The image scale is 730 meters (2,395 feet) per pixel. The image has been contrast enhanced to aid visibility of surface features.