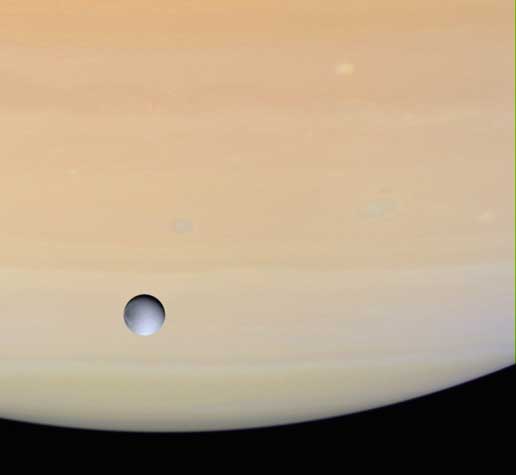 Cassini captured Dione against the globe of Saturn as it approached the icy moon for its close rendezvous on Dec. 14, 2004. This natural color view shows the moon has strong variations in brightness across its surface, but a remarkable lack of color, compared to the warm hues of Saturn's atmosphere. Several oval-shaped storms are present in the planet's atmosphere, along with ripples and waves in the cloud bands.

The images used to create this view were obtained with the Cassini spacecraft wide-angle camera at a distance of approximately 603,000 kilometers (375,000 miles) from Dione through a filter sensitive to wavelengths of ultraviolet light centered at 338 nanometers. The Sun-Dione-spacecraft, or phase, angle is 34 degrees. The image scale is about 32 kilometers (20 miles) per pixel.