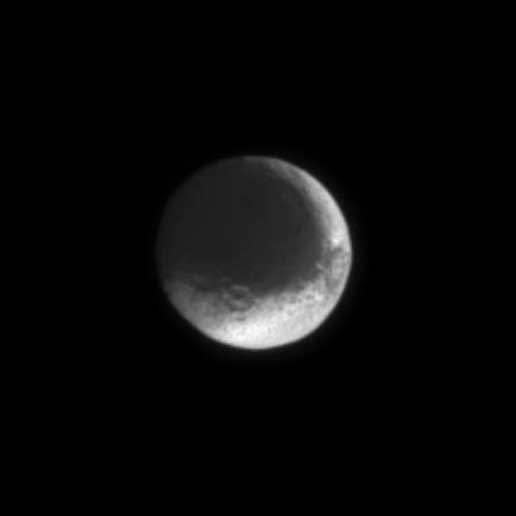 The moon with the split personality, Iapetus, presents a puzzling appearance. One hemisphere of the moon is very dark, while the other is very bright. Whether the moon is being coated by foreign material or being resurfaced by material from within is not yet known.

Iapetus' diameter is about one third that of our own moon at 1,436 kilometers (892 miles). The latest image was taken in visible light with the Cassini spacecraft narrow angle camera on July 3, 2004, from a distance of 3 million kilometers (1.8 million miles) from Iapetus (pronounced eye-APP-eh-tuss).

The brightness variations in this image are not due to shadowing, they are real. The face of Iapetus visible was observed at a Sun-Iapetus-spacecraft, or phase, angle of about 10 degrees. The image scale is 18 kilometers (11 miles) per pixel. The image was magnified by a factor of two to aid visibility.