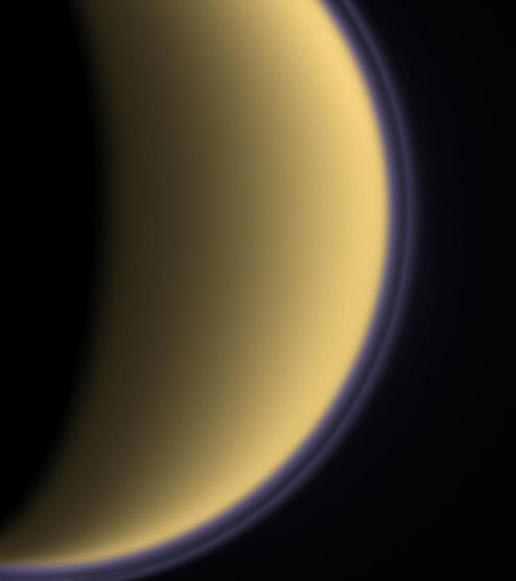 Encircled in purple stratospheric haze, Titan appears as a softly glowing sphere in this colorized image taken one day after Cassini's first flyby of that moon.

This image shows two thin haze layers. The outer haze layer is detached and appears to float high in the atmosphere. Because of its thinness, the high haze layer is best seen at the moon's limb.

The image was taken using a spectral filter sensitive to wavelengths of ultraviolet light centered at 338 nanometers. The image has been falsely colored: The globe of Titan retains the pale orange hue our eyes usually see, and both the main atmospheric haze and the thin detached layer have been brightened and given a purple color to enhance their visibility.

The best possible observations of the detached layer are made in ultraviolet light because the small haze particles which populate this part of Titan's upper atmosphere scatter short wavelengths more efficiently than longer visible or infrared wavelengths.

Images like this one reveal some of the key steps in the formation and evolution of Titan's haze. The process is thought to begin in the high atmosphere, at altitudes above 400 kilometers (250 miles), where ultraviolet light breaks down methane and nitrogen molecules. The products are believed to react to form more complex organic molecules containing carbon, hydrogen and nitrogen that can combine to form the very small particles seen as haze. The bottom of the detached haze layer is a few hundred kilometers above the surface and is about 120 kilometers (75 miles) thick.