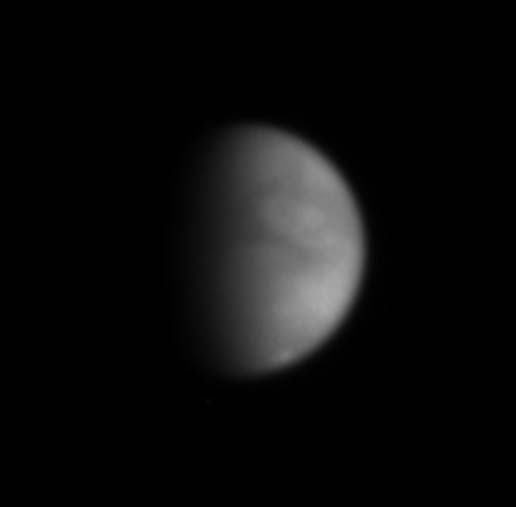 Cassini's piercing vision reveals a never-before-seen level of detail on Titan's surface as the moon executes nearly one complete rotation under the spacecraft's watchful gaze.

Complex surface markings are visible. Dark, often linear markings, with seemingly preferred orientations, cover the moon's equatorial region, except throughout the large, bright Xanadu region. Such trends in surface features are often indicative of complex internal processes. Several individual bright regions, some with faint radial patterns, can be seen upon close inspection of the images, candidates for large recent cratering events. A persistent bright feature is also observed in the movie near the South polar region where ground-based astronomers had previously detected clouds.

Cassini captured the 45 images comprising this movie in the near-infrared (938 nanometers) through a polarizer filter from June 2 and June 17, 2004, from distances ranging from 14.9 million kilometers (9.3 million miles) to 7.7 million kilometers (4.8 million miles). The Sun-Titan-spacecraft, or phase, angle ranges from 66 to 61 degrees. Most of the images have been re-sized so that Titan appears to have the same width throughout the movie. The image scale ranges from 89 to 46 kilometers (55 to 29 miles) per pixel. Contrast has been slightly enhanced for visibility.