The True Shape of Phoebe 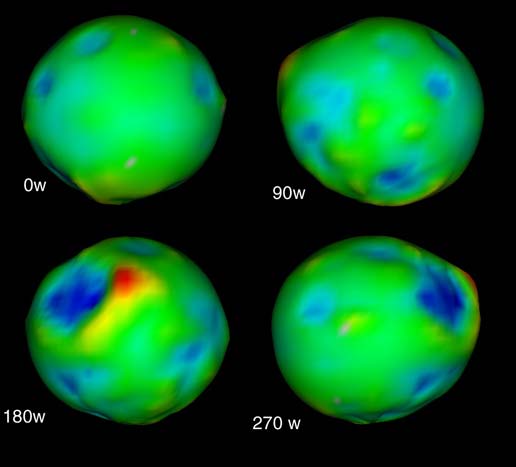 This colorful graphic illustrates that despite Phoebe's bumpy, irregular topography, the moon has a fairly round shape. A digitally rendered shape model of Phoebe was constructed using Cassini imaging data obtained before and after the spacecraft's close flyby of the Saturnian moon on June 11, 2004.

The average diameter of Phoebe is about 214 kilometers (133 miles). The four views of the model are each separated by a 90 degree rotation; the upper left is centered at 0 degrees West longitude. The others show regions of the moon centered at 90, 180 and 270 degrees West longitude, as labeled. The coloring of the models corresponds to the height of Phoebe's surface, relative to the lowest point - a range of about 16 kilometers (10 miles) - going from blue (low) to red (high). Interestingly, much of this range in height occurs in one large crater, visible in the 180 degree West view.