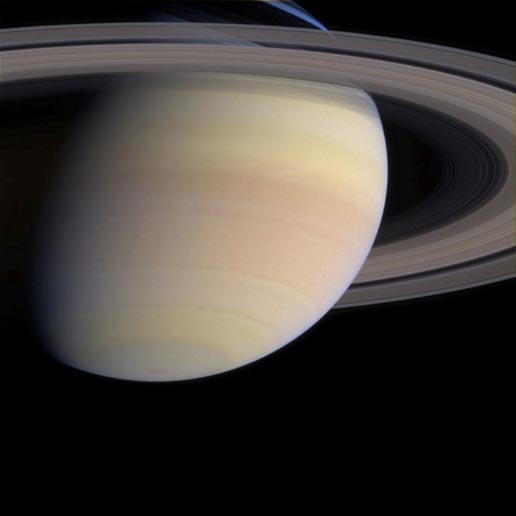 In this narrow angle camera image from May 21, 2004, the ringed planet displays subtle, multi-hued atmospheric bands, colored by yet undetermined compounds. Cassini mission scientists hope to determine the exact composition of this material.

This image also offers a preview of the detailed survey Cassini will conduct on the planet's dazzling rings. Slight differences in color denote both differences in ring particle composition and light scattering properties.

Images taken through blue, green and red filters were combined to create this natural color view. The image scale is 132 kilometers (82 miles) per pixel.

The Cassini-Huygens mission is a cooperative project of NASA, the European Space Agency and the Italian Space Agency. The Jet Propulsion Laboratory, a division of the California Institute of Technology in Pasadena, manages the Cassini-Huygens mission for NASA's Office of Space Science, Washington, D.C. The Cassini orbiter and its two onboard cameras were designed, developed and assembled at JPL. The imaging team is based at the Space Science Institute, Boulder, Colorado.