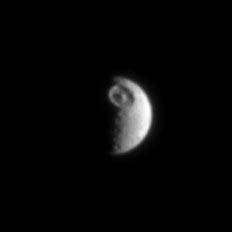 Soon after orbital insertion, Cassini returned its best look yet at the heavily cratered moon Mimas (398 kilometers, 247 miles across). The enormous crater at the top of this image, named Herschel, is about 130 kilometers (80 miles) wide and 10 kilometers (6 miles) deep.

The image was taken in visible light with the Cassini spacecraft narrow angle camera on July 3, 2004, from a distance of 1.7 million kilometers (1 million miles) from Mimas and at a Sun-Mimas-spacecraft, or phase angle of about 102 degrees. The image scale is 10 kilometers (6 miles) per pixel. The image has been magnified by a factor of two to aid visibility.