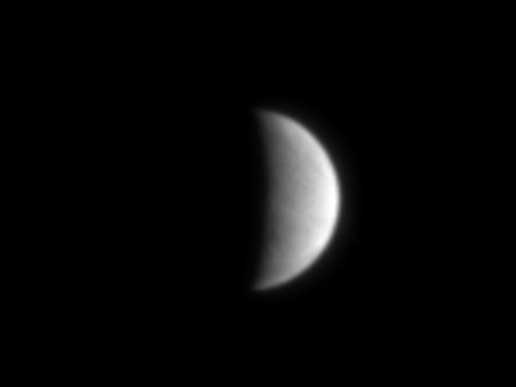 Saturn's brilliant jewel, water-ice-covered Enceladus, is the most reflective body in the solar system.

Reflecting greater than 90 percent of the incidental sunlight, this moon was the source of much surprise during the Voyager era. Enceladus (pronounced "en-SELL-uh-duss"), exhibits both smooth and lightly cratered terrains that are crisscrossed here and there by linear, groove-like features. It also has characteristics similar to those of Jupiter's moons, Ganymede and Europa, making it one of Saturn's most enigmatic moons.

Cassini will investigate its rich geologic record in a series of four planned close flybys. The first flyby is scheduled for Feb. 17, 2005.

The image was taken in visible light with the Cassini spacecraft narrow angle camera on July 3, 2004, from a distance of 1.6 million kilometers (990,000 miles) from Enceladus and at a Sun-Enceladus-spacecraft, or phase angle of about 103 degrees. The image scale is 10 kilometers (6 miles) per pixel. Enceladus is roughly 499 kilometers (310 miles) across. The image has not been magnified.