Swirls of Clouds in Infrared 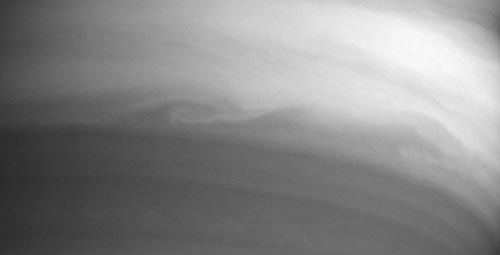 On its approach to Saturn orbit insertion, the narrow angle camera on the Cassini spacecraft snapped this image of a turbulent swirl in the high clouds of Saturn's atmosphere. The disturbance occurs in the southern edge of the equatorial band. The image was taken on May 21, 2004, from a distance of 22 million kilometers (13.7 million miles) from Saturn through a filter centered at 889 nanometers. The image scale is 131 kilometers (81 miles) per pixel. Contrast in the image was enhanced to aid visibility.