Saturn's A Ring From the Inside Out 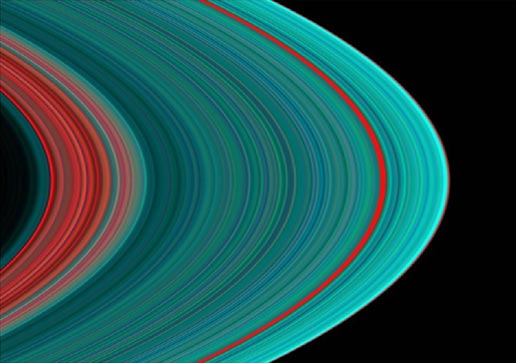 The best view of Saturn's rings in the ultraviolet indicates there is more ice toward the outer part of the rings, than in the inner part, hinting at the origins of the rings and their evolution.

Images taken during the Cassini spacecraft's orbital insertion on June 30 show compositional variation in the A, B and C rings. From the inside out, the "Cassini Division" in faint red at left is followed by the A ring in its entirety. The Cassini Division at left contains thinner, dirtier rings than the turquoise A ring, indicating a more icy composition. The red band roughly three-fourths of the way outward in the A ring is known as the Encke gap.

The ring system begins from the inside out with the D, C, B and A rings followed by the F, G and E rings. The red in the image indicates sparser ringlets likely made of "dirty," and possibly smaller, particles than in the icier turquoise ringlets.

This image was taken with the Ultraviolet Imaging Spectrograph instrument, which is capable of resolving the rings to show features up to 97 kilometers (60 miles) across, roughly 100 times the resolution of ultraviolet data obtained by the Voyager 2 spacecraft.

The Cassini-Huygens mission is a cooperative project of NASA, the European Space Agency and the Italian Space Agency. The Jet Propulsion Laboratory, a division of the California Institute of Technology in Pasadena, manages the Cassini-Huygens mission for NASA's Office of Space Science, Washington, D.C. The Cassini orbiter was designed, developed and assembled at JPL. The Ultraviolet Imaging Spectrograph was built at, and the team is based at the University of Colorado, Boulder, Colo.