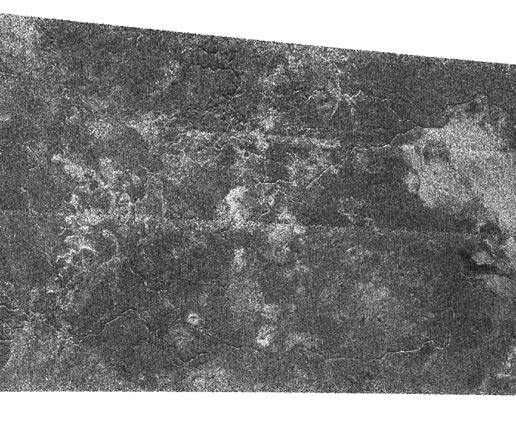 Fluids have flowed and cut these deeply-incised channels into the icy surface of Titan as seen in this Synthetic Aperture Radar image. The channels are roughly 1 kilometer across (0.6 miles) and perhaps 200 meters deep (650 feet); some can be traced as far as 200 kilometers (120 miles). Many of them have angular segments suggesting they may follow faults in Titan’s crust.

Taken together with the two other radar passes (October 2004 and February 2005), these very high resolution images have identified at least two distinct types of drainage and channel formation on Titan. The style shown in this image consists of long valleys following angular patterns without many tributaries, suggesting that fluids flow over great distances. By contrast, (http://www.nasa.gov/mission_pages/cassini/multimedia/pia03565.html) shows channels that form a denser network that might indicate rainfall.

This Cassini radar image was acquired as a part of the Titan flyby observations taken on Sept. 7, 2005, from a distance of about 2,000 kilometers (1,250 miles). The area is located at about 55 degrees south latitude, 7.5 degrees west longitude and extends over 300 kilometers (186 miles) right to left.