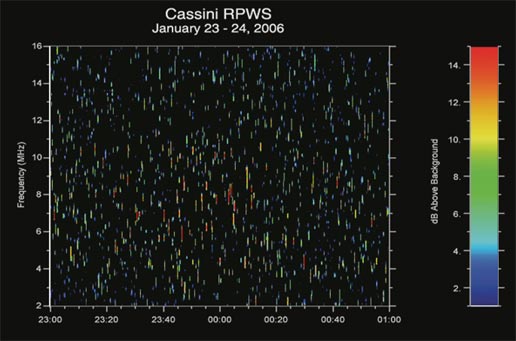 This audio clip was created from radio signals received by the radio and plasma wave science instrument on the Cassini spacecraft. The bursty radio emissions were generated by lightning flashes on Saturn and are similar to the crackles and pops one hears on an AM radio during a thunderstorm on Earth. This storm on Saturn occurred on January 23 and 24, 2006. The clip compresses two hours of observations into about 28 seconds. Therefore, every second of the audio clip corresponds to about 4 minutes, 18 seconds.

For more information about the Cassini-Huygens mission visit http://saturn.jpl.nasa.gov and the instrument team's home page, http://www-pw.physics.uiowa.edu/cassini/ .