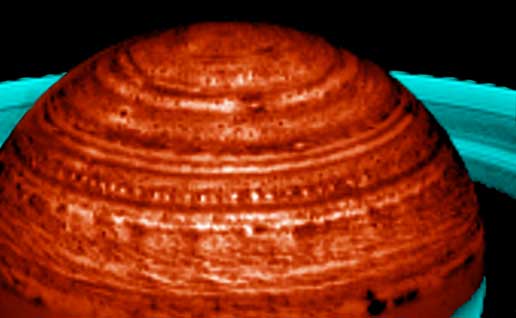 In this image, Saturn's fascinating meteorology manifests itself in a "string of pearls" formation, spanning over 60,000 kilometers (37,000 miles).

Seen in new images acquired by Cassini's visual and infrared mapping spectrometer and lit from below by Saturn's internal thermal glow, the bright “pearls” are actually clearings in Saturn's deep cloud system. More than two dozen occur at 40 degrees north latitude. Each clearing follows another at a regular spacing of some 3.5 degrees in longitude. 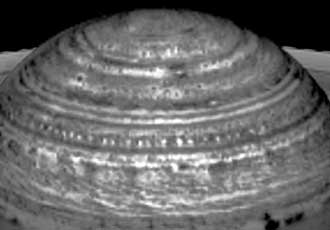 This is the first time such a regular and extensive train of cloud-clearings has been observed. The regularity indicates that they may be a manifestation of a large planetary wave. Scientists plan to take more observations of this phenomenon over the next few years to try to understand Saturn's deep circulation systems and meteorology. This image was taken on April 27, 2006.

The Cassini-Huygens mission is a cooperative project of NASA, the European Space Agency and the Italian Space Agency. The Jet Propulsion Laboratory, a division of the California Institute of Technology in Pasadena, manages the mission for NASA's Science Mission Directorate, Washington, D.C. The visual and infrared mapping spectrometer team is based at the University of Arizona where this image was produced.