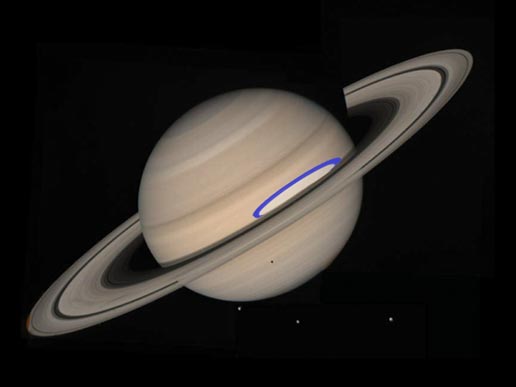 Voyager 1 and 2 observed radio signals from lightning which were interpreted as being from a persistent, low-latitude storm system which was extended in longitude, perhaps similar to the region highlighted on this Voyager 2 image acquired on Aug. 4, 1981, from a distance of 21 million kilometers (13 million miles).

Similar lightning detections by Cassini suggest a much more variable pattern of storms which come and go on time scales of days. The differences may be explained, in part, by stark differences in the shadows cast by the rings between the Voyager and Cassini eras. This image was previously released on December 5, 1998. For original caption see http://photojournal.jpl.nasa.gov/catalog/PIA01364.

The Cassini-Huygens mission is a cooperative project of NASA, the European Space Agency and the Italian Space Agency. The Jet Propulsion Laboratory, a division of the California Institute of Technology in Pasadena, manages the Cassini-Huygens mission for NASA's Science Mission Directorate, Washington, D.C. The Cassini orbiter was designed, developed and assembled at JPL. The radio and plasma wave science team is based at the University of Iowa, Iowa City.

For more information about the Cassini-Huygens mission, visit http://saturn.jpl.nasa.gov and the instrument team's home page, http://www-pw.physics.uiowa.edu/plasma-wave/cassini/home.html.