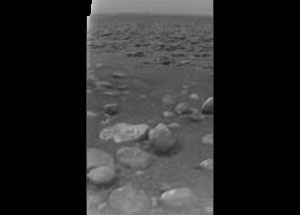 This raw image was returned by the Descent Imager/Spectral Radiometer camera onboard the European Space Agency's Huygens probe after the probe descended through the atmosphere of Titan. It shows the surface of Titan with ice blocks strewn around. The size and distance of the blocks will be determined when the image is properly processed.

The Descent Imager/Spectral Radiometer is one of two NASA instruments on the probe.