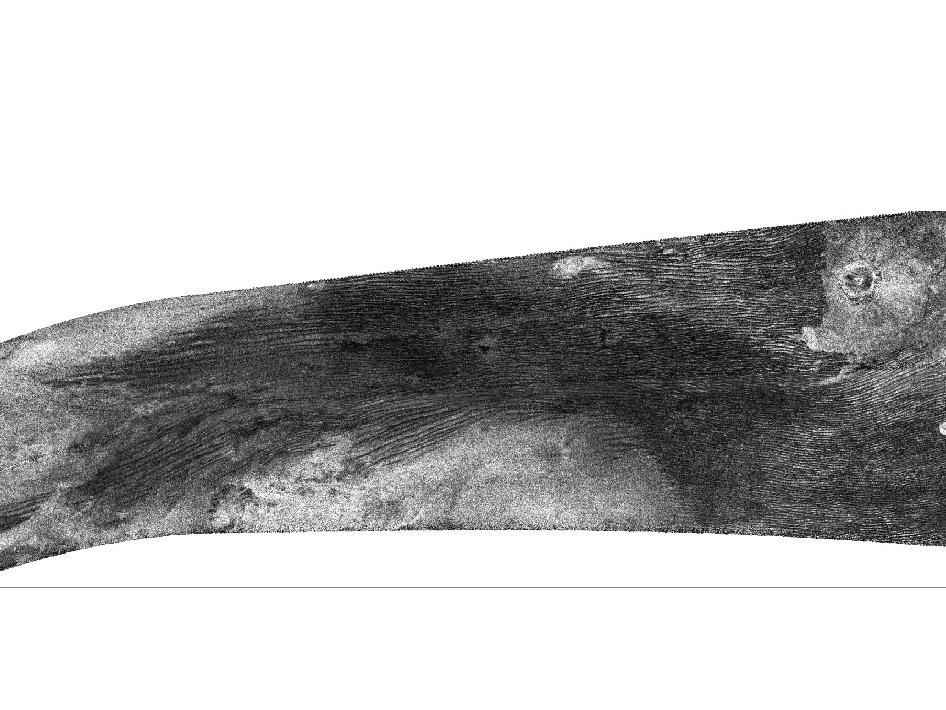 Titan -Putting it all Together

Three of Titan's major surface features-dunes, craters and the enigmatic Xanadu-appear in this radar image from NASA's Cassini spacecraft. The hazy bright area at the left that extends to the lower center of the image marks the northwest edge of Xanadu, a continent-sized feature centered near the moon's equator. At upper right is the crater Ksa, first seen by Cassini in 2006 (PIA09172). The dark lines running between these two features are linear dunes, similar to sand dunes on Earth in Egypt and Namibia.

The dune fields on Titan, Saturn's largest moon, nearly girdle the globe at latitudes from about 30 degrees north to 30 degrees south, with the notable exception of Xanadu. In this image, the dunes overlap Xanadu only slightly. They are also more widely separated and discontinuous at the boundary, a characteristic typical of dunes on Earth where the sand supply is limited. The dunes also either wind their way around or terminate at other, smaller features, including Ksa.

Cassini's Titan Radar Mapper acquired this synthetic-aperture radar (SAR) image, centered at 11 degrees north latitude and 74 degrees west longitude, on June 21, 2011. The image covers an area 350 kilometers (217 miles) high by 930 kilometers (578 miles) wide, with resolution of about 350 meters per pixel. North is at the top, and the image is illuminated from the top. Incidence angle varies from 15 to 30 degrees.

The Cassini-Huygens mission is a cooperative project of NASA, the European Space Agency and the Italian Space Agency. NASA's Jet Propulsion Laboratory, a division of the California Institute of Technology in Pasadena, manages the mission for NASA's Science Mission Directorate, Washington, D. C. The Cassini orbiter was designed, developed and assembled at JPL. The radar instrument was built by JPL and the Italian Space Agency, working with team members from the United States and several European countries.

For more information about the Cassini-Huygens mission, visit http://saturn.jpl.nasa.gov/.