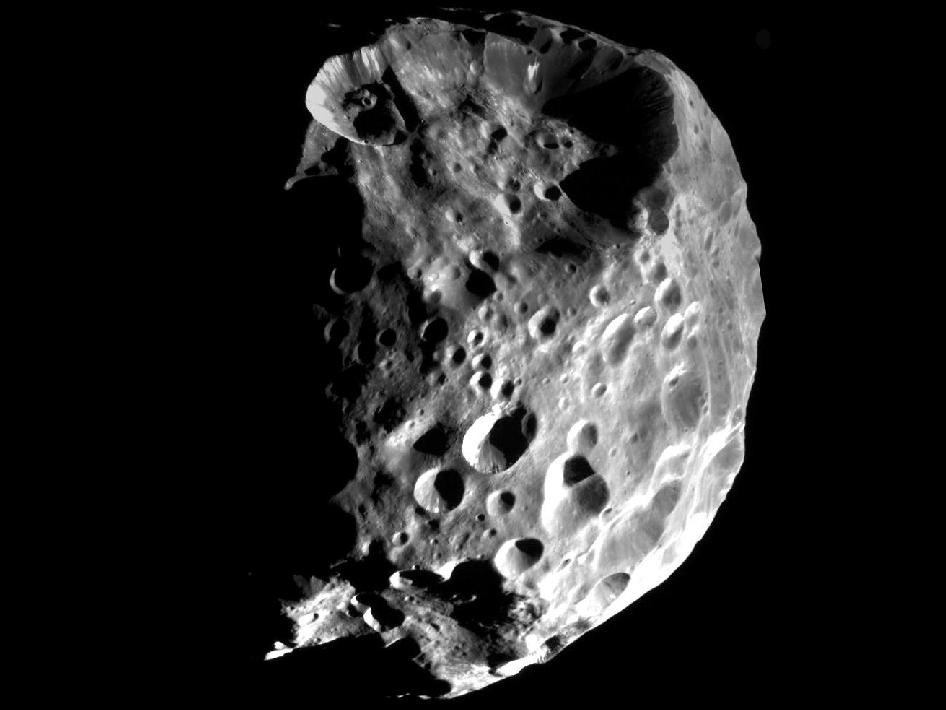 The Face of Phoebe

Phoebe's true nature is revealed in startling clarity in this mosaic of two images taken during Cassini's flyby on June 11, 2004. The image shows evidence for the emerging view that Phoebe may be an ice-rich body coated with a thin layer of dark material. Small bright craters in the image are probably fairly young features. This phenomenon has been observed on other icy satellites, such as Ganymede at Jupiter. When impactors slammed into the surface of Phoebe, the collisions excavated fresh, bright material -- probably ice -- underlying the surface layer. Further evidence for this can be seen on some crater walls where the darker material appears to have slid downwards, exposing more light-colored material. Some areas of the image that are particularly bright - especially near lower right - are over-exposed.

An accurate determination of Phoebe's density -- a forthcoming result from the flyby -- will help Cassini mission scientists understand how much of the little moon is comprised of ices.

This spectacular view was obtained at a phase, or Sun-Phoebe-spacecraft, angle of 84 degrees, and from a distance of approximately 32,500 kilometers (20,200 miles). The image scale is approximately 190 meters (624 feet) per pixel. No enhancement was performed on this image.

The Cassini-Huygens mission is a cooperative project of NASA, the European Space Agency and the Italian Space Agency. The Jet Propulsion Laboratory, a division of the California Institute of Technology in Pasadena, manages the Cassini-Huygens mission for NASA's Office of Space Science, Washington, D.C. The Cassini orbiter and its two onboard cameras, were designed, developed and assembled at JPL. The imaging team is based at the Space Science Institute, Boulder, Colo.