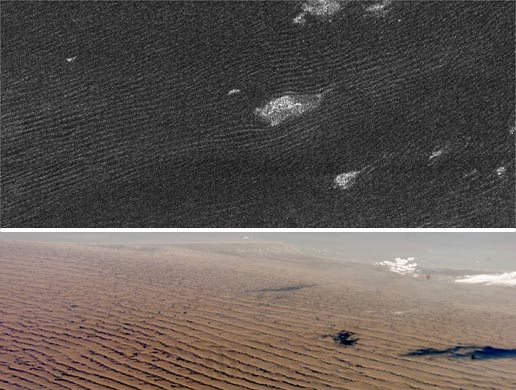 Until a couple of years ago, scientists thought the dark equatorial regions of Titan might be liquid oceans. New radar evidence shows they are seas -- but seas of sand dunes like those in the Arabian or Namibian Deserts. A University of Arizona Cassini radar team member and colleagues report the findings in Science (May 5).

For the full story see the University of Arizona press release: http://uanews.org/spots/12614.html .

Image above: Cassini radar sees sand dunes on Saturn's giant moon Titan (upper photo) that are sculpted like Namibian sand dunes on Earth (lower photo). The bright features in the upper radar photo are not clouds but topographic features among the dunes.