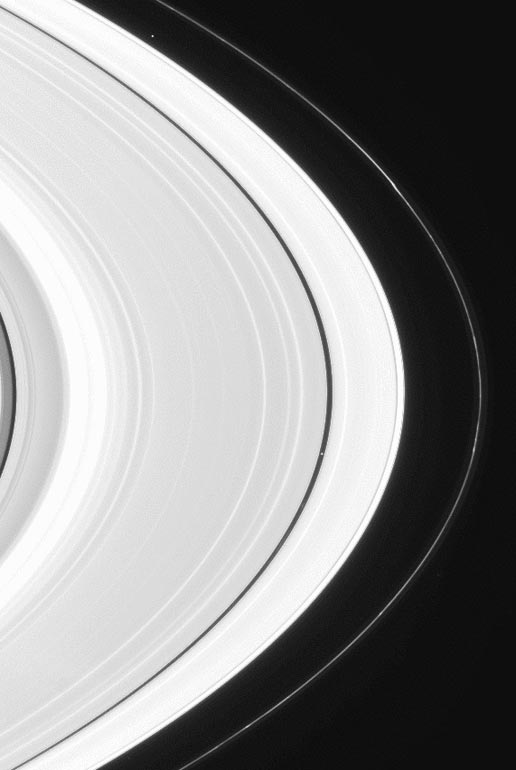 The Cassini spacecraft has sighted tiny Pan, a body only 20 kilometers (12 miles) across. Pan is responsible for parting the Encke Gap in Saturn's outer A ring. The 22 narrow angle camera images making up this movie and taken in visible light were part of a sequence designed specifically to search for Pan and for small moonlets near Saturn's F ring.

The Encke Gap is a relatively narrow gap, approximately 270 kilometers (168 miles) wide. Pan was discovered in 1990 in images returned by the Voyager spacecraft in 1980 and 1981. This is the first time Pan has been seen since Voyager days.

Cassini's closeness to Saturn makes it possible to now see that the F ring shepherd moons, Prometheus and Pandora, are not spherical. Also of note is the faint, discontinuous ring material in the Encke Gap ahead of Pan at the movie's start, and a great deal of complex knotted structure in the F ring.

The view is upward from Cassini's southern vantage point beneath the ring plane. The moons visible here are orbiting Saturn in a plane that is tilted 66 degrees away from the viewer.

These images were taken on June 21, 2004, from a distance of approximately 6.5 million kilometers (4 million miles) from Saturn. The image scale is approximately 39 kilometers (24 miles) per pixel. Contrast was enhanced in order to make Pan and Atlas more visible; as a result, the rings have a somewhat washed-out appearance.

The Cassini-Huygens mission is a cooperative project of NASA, the European Space Agency and the Italian Space Agency. The Jet Propulsion Laboratory, a division of the California Institute of Technology in Pasadena, manages the Cassini-Huygens mission for NASA's Office of Space Science, Washington, D.C. The Cassini orbiter and its two onboard cameras, were designed, developed and assembled at JPL. The imaging team is based at the Space Science Institute, Boulder, Colo.