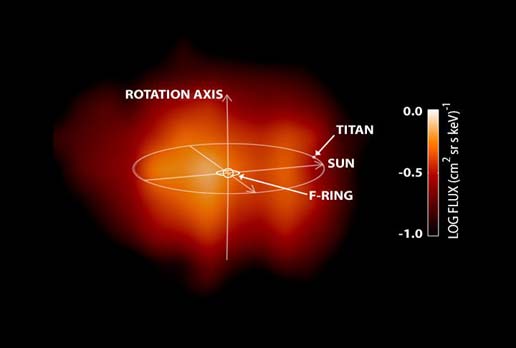 Saturn's magnetosphere is seen for the first time in this image taken by the Cassini spacecraft on June 21, 2004. A magnetosphere is a magnetic envelope of charged particles that surrounds some planets, including Earth. It is invisible to the human eye, but Cassini's Magnetospheric Imaging Instrument was able to detect the hydrogen atoms (represented in red) that escape it. The emission from these hydrogen atoms comes primarily from regions far from Saturn, well outside the planet's rings, and perhaps beyond the orbit of the largest moon Titan.

This picture was taken by the ion and neutral camera, one of three sensors that comprise the magnetospheric imaging instrument, from a distance of about 3.7 million miles (about 6 million kilometers) from Saturn.

The magnetospheric imaging instrument will continue to study Saturn's magnetosphere throughout the mission's four-year lifetime. The Cassini-Huygens mission is a cooperative project of NASA, the European Space Agency and the Italian Space Agency. The Jet Propulsion Laboratory, a division of the California Institute of Technology in Pasadena, manages the Cassini-Huygens mission for NASA's Office of Space Science, Washington, D.C. The Cassini orbiter was designed, developed and assembled at JPL. The magnetospheric imaging instrument team is based at the Johns Hopkins University, Laurel, Md.