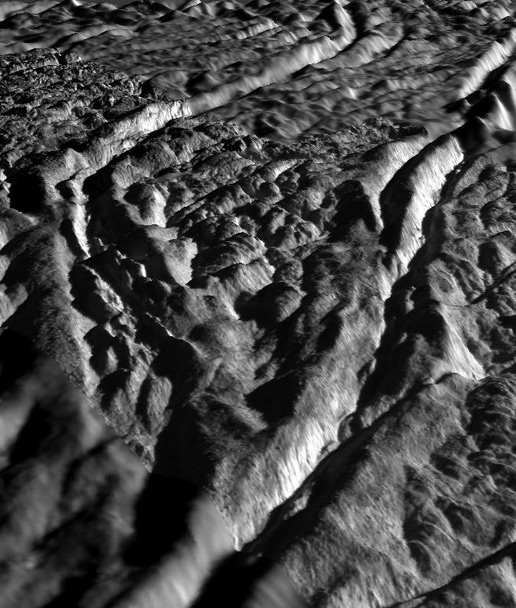 This perspective view of Baghdad Sulcus was generated using high resolution images of Enceladus acquired in August 2008 at 12 to 30 meters (40 to 100 feet) resolution, together with a new topographic map of the region produced by Dr. Paul Schenk at the Lunar and Planetary Institute in Houston, TX. Lower resolution images to either side were acquired at 50 to 80 meter (165 to 260 feet) resolution. Baghdad Sulcus is one of several prominent linear structures, dubbed “tiger stripes,” within the geologically active south polar region of Enceladus. This view shows a wedge-shaped area between two prominent branches of Baghdad Sulcus. Each branch consists of two large parallel ridges up to 2 kilometers (1.2 mile) across separated by a deep V-shaped medial trough. The ridges are 80 to 100 meters (approximately 260 to 325 feet) high. The medial troughs between the ridges are 200 to 250 meters (650 to 820 feet) deep. The maximum separation between the two branches is 12 kilometers (7.5 miles). Troughs such as those shown here are probably the source of numerous jets making up the large active water vapor plume over the south pole of Enceladus. The floors of the medial troughs are often broken up into smaller ridges. These could be blocks of crust that have slid down the walls of the trough or fractured blocks pushed up from below. Relief has been exaggerated by a factor of ~10 to enhance clarity.

The raw data from which this product was developed were retrieved from the Planetary Data System's Cassini archives. The Cassini-Huygens mission is a cooperative project of NASA, the European Space Agency and the Italian Space Agency. The Jet Propulsion Laboratory, a division of the California Institute of Technology in Pasadena, manages the mission for NASA's Science Mission Directorate, Washington, D.C. The Cassini orbiter and its two onboard cameras were designed, developed and assembled at JPL. The imaging operations center is based at the Space Science Institute in Boulder, Colo.