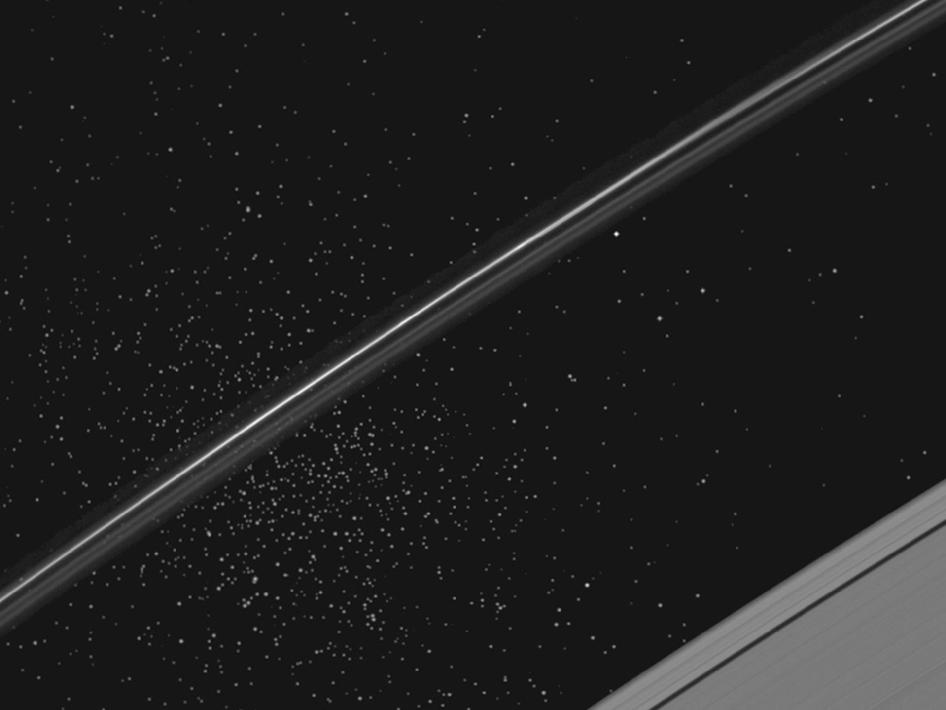 Catching a Cluster of Stars

› Play video While NASA's Cassini spacecraft was pointed to study Saturn's F ring, it happened to catch a globular star cluster passing through the camera's field of view. This movie is a concatenation of 13 images each taken about three minutes apart that show NGC 5139, or Omega Centauri. Some of the cluster's stars can even be seen through the ring's narrow Keeler Gap near the end of the movie. The cluster was in Ptolemy's star catalogue but was officially discovered by Edmond Halley in 1677 and was recognized as a globular cluster by John Herschel. This view looks toward the northern, unilluminated side of the rings from about 53 degrees above the ring plane. The image was taken in visible light with the Cassini spacecraft narrow-angle camera on March 29, 2009. The view was acquired at a distance of approximately 1.2 million kilometers (746,000 miles) from Saturn and at a sun-Saturn-spacecraft, or phase, angle of 57 degrees. Image scale is 7 kilometers (4 miles) per pixel. The Cassini-Huygens mission is a cooperative project of NASA, the European Space Agency and the Italian Space Agency. The Jet Propulsion Laboratory, a division of the California Institute of Technology in Pasadena, manages the mission for NASA's Science Mission Directorate, Washington, D.C. The Cassini orbiter and its two onboard cameras were designed, developed and assembled at JPL. The imaging operations center is based at the Space Science Institute in Boulder, Colo. For more information about the Cassini-Huygens mission visit http://saturn.jpl.nasa.gov/. The Cassini imaging team homepage is at http://ciclops.org. Image Credit: NASA/JPL/SSI