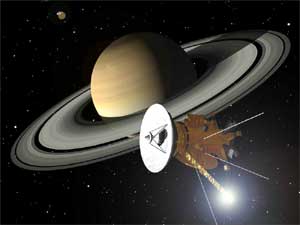 The Cassini spacecraft successfully performed a critical six-minute trajectory correction maneuver May 27 to put it on course with its first encounter, Saturn's outermost moon Phoebe, set for June 11. The spacecraft is operating normally and is in excellent health.

Image right: The above image is an artist's rendition of the Cassini spacecraft approaching the planet Saturn. + Click for full image. Image credit: NASA/JPL.

"The maneuver is very critical for getting us into Saturn orbit because it is the first checkout of the bipropellant pressurization system after nearly five years of dormancy," said Todd Barber, propulsion engineer for Cassini at NASA's Jet Propulsion Laboratory, Pasadena, Calif. "It sets the stage for Saturn orbit insertion on June 30."

During the course of its trip, Cassini has traveled 3.4 billion kilometers (2.1 billion miles). "We couldn't have asked for a smoother ride," said Robert T. Mitchell, program manager for the Cassini-Huygens mission at JPL. "All the instruments are performing well, and for almost seven years we have traveled without any major hitches. The excitement is building as we are getting ready to put Cassini in orbit around the ringed planet." The orbiter has relied on three radioisotope thermoelectric generators to power all the electrical components, including the 12 science instruments. The European-built Huygens probe on board Cassini carries six instruments.

Phoebe is an oddly shaped moon with a dark surface. It orbits in the opposite direction from the motion of most other bodies in the solar system. The backwards-revolution leads scientists to believe that it is an object captured from the distant Kuiper Belt, making it an interesting target. "The Phoebe flyby may offer the first glimpse of what the frigid bodies at the edge of the solar system look like," said Dr. Bonnie Buratti, scientist on the Cassini-Huygens mission at JPL. "These bodies, which include Pluto and its satellite Charon, are believed to be remnant objects left over from the formation of the planets 4.5 billion years ago."

After the Phoebe flyby, Cassini will be on course for Saturn. On June 30 (July 1 Universal Time), Cassini will become the first orbiter around Saturn. "The two Voyager and Pioneer spacecraft flew by the planet and saw it from a distance two or three days at a time. With Cassini, we will be in the city limits for four years," said Dr. Dennis Matson, project scientist for Cassini at JPL. "The difference is like driving by the Grand Canyon versus stopping, getting off and enjoying the sights for a while."

A prime target for Cassini and the piggyback Huygens probe built by the European Space Agency is the smoggy moon Titan. "In the 350 years since the discovery of Titan we have come to see it as a world with surprising similarities to our own, yet located almost 1.5 billion kilometers (900 million miles) from the Sun," said Dr. Jonathan Lunine, Huygens interdisciplinary scientist and professor of planetary science and physics at the University of Arizona, Tucson. "With a thick, nitrogen-rich atmosphere and possible hydrocarbon seas, Titan may harbor organic compounds important in the chain of chemistry that led to life on Earth."

Six months after reaching Saturn, Cassini will release the wok-shaped Huygens probe towards Titan on Dec. 24, 2004 (Dec. 25 Universal Time). The event will be by far the most distant descent of a robotic probe on another object in the solar system. On Jan. 14, 2005 (Jan. 15 Universal Time), Huygens will enter Titan's atmosphere, deploy its parachute, and begin its scientific observations of Titan.

For the latest images and more information about the Cassini-Huygens mission, visit http://saturn.jpl.nasa.gov.