Cassini-Huygens Will Unlock Saturn's Secrets
The international Cassini-Huygens mission is poised to begin an extensive tour of Saturn, its majestic rings and 31 known moons. After a nearly seven-year journey, Cassini is scheduled to enter orbit around Saturn at 7:30 p.m. PDT (10:30 p.m. EDT) June 30, 2004. 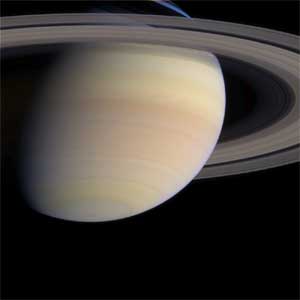 Image right: In this image taken by Cassini on May 21, 2004, the ringed planet displays subtle, multi-hued atmospheric bands, colored by yet undetermined compounds. Cassini mission scientists hope to determine the exact composition of this material. At the time the image was taken, the spacecraft was 1.2 billion kilometers (750 million miles) from Earth and now 15.7 million kilometers (9.8 million miles) from Saturn. + Click for full image. Image credit: NASA/JPL/Space Science Institute.

"The Saturn system represents an unsurpassed laboratory, where we can look for answers to many fundamental questions about the physics, chemistry and evolution of the planets and the conditions that give rise to life," said Dr. Ed Weiler, associate administrator for space science at NASA Headquarters, Washington, D.C.

Launched Oct. 15, 1997, on a journey covering 3.5 billion kilometers (2.2 billion miles), Cassini is the most highly instrumented and scientifically capable planetary spacecraft ever flown. It has 12 instruments on the Cassini orbiter and six more on the Huygens probe. The mission represents the best technical efforts of 260 scientists from the United States and 17 European nations. The cost of the Cassini mission is approximately $3 billion.

For the critical Saturn orbit insertion maneuver, the spacecraft will fire its main engine for 96 minutes. The maneuver will reduce Cassini's speed and allow it to be captured into orbit as a satellite of Saturn. Cassini will pass through a gap between two of Saturn's rings, called the F and G rings. Cassini will swing close to the planet and begin the first of 76 orbits around the Saturn system. During Cassini's four-year mission, it will execute 52 close encounters with seven of Saturn's 31 known moons. 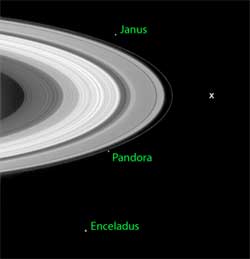 Image left: The path that lies ahead for the Cassini-Huygens mission is indicated in this image which illustrates where the spacecraft will be just 27 days from now, when it arrives at Saturn. The X indicates the point where Cassini will pierce the ring plane on June 30, 2004, going from south to north of the ring plane, 33 minutes before the main engine fires to begin orbital insertion. + Click for full image. Image credit: NASA/JPL/Space Science Institute.

There are risks involved with orbit insertion, but mission planners have prepared for them. There is a backup engine in case the main engine fails. The region of passage through the ring plane was searched for hazards with the best Earth- and space-based telescopes.

Particles too small to be seen from Earth could be fatal to the spacecraft, so Cassini will be turned to use its high-gain antenna as a shield against small objects.

Saturn is the sixth planet from the sun. It is the second largest planet in our solar system, after Jupiter. The planet and its ring system serve as a miniature model for the disc of gas and dust surrounding the early Sun that formed the planets. Detailed knowledge of the dynamics of interactions among Saturn's elaborate rings and numerous moons will provide valuable data for understanding how each of the solar system's planets evolved.

The study of Titan, Saturn's largest moon, is one of the major goals of the mission. Titan may preserve, in deep-freeze, many of the chemical compounds that preceded life on Earth. Cassini will execute 45 flybys of Titan, coming as close as approximately 950 kilometers (590 miles) above the surface. This will permit high-resolution mapping of the moon's surface with an imaging radar instrument, which can see through the opaque haze of Titan's upper atmosphere.

"Titan is like a time machine taking us to the past to see what Earth might have been like," said Dr. Dennis Matson, Cassini project scientist at NASA's Jet Propulsion Laboratory, Pasadena, Calif. "The hazy moon may hold clues to how the primitive Earth evolved into a life-bearing planet."

On Dec. 25, 2004 (Dec. 24 in U.S. time zones) Cassini will release the wok-shaped Huygens probe on its journey toward Titan. Huygens will be the first probe to descend to the surface of a moon of another planet. It will also make the most distant descent by a robotic probe ever attempted on another object in the solar system. On Jan. 14, 2005, after a 20-day ballistic freefall, Huygens will enter Titan's atmosphere. It will deploy parachutes and begin 2.5 hours of intensive scientific observations. The Huygens probe will transmit data to the Cassini spacecraft, which will relay the information back to Earth.

JPL designed, developed and assembled the Cassini orbiter. The European Space Agency managed the development of Huygens and is in charge of operations of the probe from its control center in Darmstadt, Germany. The Italian Space Agency provided the high-gain antenna, much of the radio system and elements of several of Cassini's science instruments. JPL manages the overall program for NASA's Office of Space Science, Washington, D.C.