Scientists Solve the Mystery of Methane in Titan's Atmosphere
An international team of planetary scientists may have solved the mystery of why the atmosphere of Saturn's moon, Titan, is rich in methane. 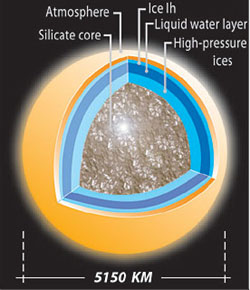 Image right: This graphic illustration of Titan's internal structure shows the layers involved in releasing methane during three episodes in the moon's history. Methane is locked in the methane-rich water ice that forms a crust above an ocean of liquid water mixed with ammonia. (Graphic: Tobie et al., Icarus, Volume 175, Issue 2, p. 496-502, 2005).


Methane, which on Titan plays a role similar to water on Earth, is locked in a methane-rich water ice that forms a crust above an ocean of liquid water mixed with ammonia, the scientists say. Major episodes of outgassing pumped methane into Titan's mostly nitrogen atmosphere three times during the moon's evolutionary history, they discovered.

Results from the European Space Agency's Huygens probe that landed on Titan Jan. 14, 2005, and remote sensing instruments on NASA's Cassini orbiter agree with their findings, they add.

The presence of methane in Titan's atmosphere is one of the major enigmas that the Cassini-Huygens mission to Saturn's system is trying to resolve, they noted.

Scientists have long known that Titan's atmosphere contains methane, ethane, acetylene and many other hydrocarbon compounds. But sunlight irreversibly destroys methane after tens of millions of years, so something has replenished methane in Titan's thick air during the moon's 4.5 billion-year history.

Ammonia acting as an antifreeze, heat leftover from formation, and heat from radioactive elements aided the release of methane during the first billion years, or possibly just a few hundred million years, in Titan's history. Much of the methane in this first release might have been reabsorbed into Titan's interior. But whatever methane was left in the atmosphere was photochemically destroyed in the first billion years, Lunine said.

The second methane-release episode around two billion years ago is even more interesting, Lunine said. That's when convection began within Titan's silicate core.

"The core, made of rock, continued to heat up because it contains natural radioactive elements like uranium, potassium and thorium. On Earth, these elements are concentrated in the crust, but on Titan, they'd be deep down in the rock. So the core gets hotter and hotter, until finally it's soft enough for convection to start."

Convection is the mechanical turnover of material to remove heat. The second event of around two billion years ago injected a burst of convection heat into Titan's overlying mantle, causing the ice crust to thin and methane to outgas through ice to the surface.

The latest methane-release episode began around 500 million years ago. It's the result of the planet cooling by convection in Titan's solid ice crust.

While the cause for each outgassing episode differs, the result is the same, Lunine said: "There's an injection of methane into the surface and atmosphere of Titan. We are now in an era where there's enough outgassing to add methane to the atmosphere, but not enough for widespread seas of methane."

This outgassing episode will be Titan's last. "There'll be no further such events until billions of years in the future, when the sun goes red giant and cooks Titan," Lunine said. "Methane outgassing will cease within the next few hundred million years. Then photochemistry will destroy the surface methane and Titan will indeed dry up. The atmosphere will clear of haze, and Titan will look very different."

When the Huygens probe warmed Titan's damp surface where it landed in January 2005, its instruments inhaled whiffs of methane. The heat of the probe caused methane trapped in pores just below the surface to evaporate, just as subsurface water would evaporate on Earth if you fired up a camping stove in the sand of a dry streambed.