Cracks on Enceladus Open and Close under Saturn's Pull
Cracks in the icy surface of Saturn's moon Enceladus open and close daily under the pull of Saturn's gravity, according to new calculations by NASA-sponsored researchers.

"Tides generated by Saturn's gravity could control the timing of eruptions from cracks in the southern hemisphere of Enceladus," said Dr. Terry Hurford of NASA's Goddard Space Flight Center, Greenbelt, Md. Hurford is lead author of a paper on this research appearing in Nature May 17. This paper is one of two studies on Enceladus in this issue of Nature. The other paper explains that tidal forces cause the sides of the cracks to rub together and produce enough heat to vaporize ice into plumes that jettison off the moon, researchers suggest. 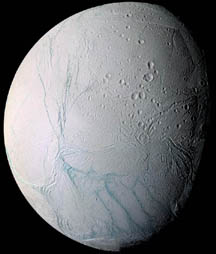 Image right: This is a mosaic of Enceladus compiled from 21 images taken by the Cassini spacecraft as is swooped past the moon's south pole on July 14, 2005. The Tiger Stripe region appears as a series of long cracks toward the bottom. The mosaic is in false color, and includes images taken in various types of light, including ultraviolet and infrared. Print-resolution copy Credit: NASA/JPL/Space Science Institute

In 2005, the Cassini spacecraft flew by Enceladus and saw plumes of material erupting from the south pole of Enceladus. Scientists were surprised to see this because eruptions are powered by heat from an object's interior. Enceladus is tiny compared to most moons, only about 500 kilometers (310 miles) in diameter, so it should have lost its interior heat to the cold of space long ago.

A closer look by Cassini revealed a series of 120-kilometer (75-mile) long cracks in the south polar region of Enceladus, which were nicknamed "Tiger Stripes" because they resembled a tiger's distinctive marks. The stripes are warmer than their surroundings, so scientists believe they are the source of the eruptions. The Cassini observations also show the plumes consist of water vapor, so there is evidence for liquid water under the ice. Since liquid water is necessary to support known forms of life, Enceladus has become a promising place to look for extraterrestrial life.

Enceladus' 1.3-Earth-day orbit around Saturn is slightly elliptical (egg-shaped), so the moon's distance from Saturn changes regularly as it travels in its orbit. When Enceladus is closer to Saturn, the pull of Saturn's gravity is stronger, creating a larger tide; and when Enceladus is farther away, the pull is weaker, creating a smaller tide. Saturn's position in Enceladus' sky also changes slightly, moving the location of the tide on Enceladus' surface from east to west and back again with each orbit. These two effects combine to produce changing stress on the moon's icy surface. The team developed a computer model to calculate how the changing stress affects the Tiger Stripes.

"We found that because of the way the Tiger Stripes are oriented on the surface, when Enceladus is farthest from Saturn, the stresses in the region pull most of them open, and when Enceladus is closest to Saturn, the stresses force most of them to close," said Hurford. "Different stripes open at different times in the orbit. Assuming they erupt as soon as they open, exposing liquid water to the vacuum of space, we can predict which stripes will be erupting at certain times in the orbit. Also, because most of the stripes are open when Enceladus is farthest from Saturn, we expect the eruptive activity to be greatest at this time."

It has been hard to conclusively test the model so far because of the orientation of the stripes when Cassini took images of the eruptions. Cassini saw the eruptions when they appeared on the edge of Enceladus as they were backlit by the sun. From this viewpoint, the Tiger Stripes were lined up so that some were closer to the spacecraft and some were farther away. It is hard for the team to tell if an eruption was coming from a stripe in the foreground or from one in the background. However, future observations of the moon when Cassini is in a different location may provide a partial test by allowing the eruptions from one stripe to appear distinct from the rest.

The research was funded through NASA's Postdoctoral Program Fellowship. The team includes Hurford, Dr. Paul Helfenstein of Cornell University, Ithaca, N.Y., Dr. Greg Hoppa of Raytheon, Woburn, Mass., Dr. Richard Greenberg of the University of Arizona, Tucson, and Dr. Bruce Bills of the Scripps Institution of Oceanography, La Jolla, Calif., and Goddard. The Cassini-Huygens mission is a cooperative project among NASA, the European Space Agency, and the Italian Space Agency. JPL, a division of the California Institute of Technology in Pasadena, manages the Cassini-Huygens mission for NASA's Science Mission Directorate, Washington. The Cassini orbiter was designed, developed, and assembled at JPL.