Radar imaging data from a July 22, 2006, flyby provide convincing evidence for large bodies of liquid on Titan today. A new false-color radar view gives a taste of what Cassini saw. Some highlights of the article follow below. 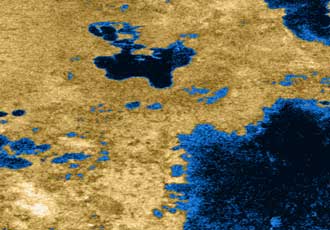 Image right: This colorized radar view from Cassini shows lakes on Titan. Color intensity is proportional to how much radar brightness is returned. The colors are not a representation of what the human eye would see. Image credit: NASA/JPL/USGS + Full image and caption
+ Related release: Cassini Finds Lakes on Titan's Arctic Region (July 27, 2006)

-Radar-dark patches are interpreted as lakes based on their very low radar reflectivity and morphological similarities to lakes, including associated channels and location in topographic depressions.

-Radar-dark surfaces are smooth and most likely liquid, rock, ice or organics. More than 75 radar-dark patches or lakes were seen, ranging from 3 kilometers (1.8 miles) to more than 70 kilometers (43 miles) across.

-Some lakes appear partly dry, while others seem liquid-filled. Some of the partly filled lakes may never have filled fully, or may have partly evaporated at some point in the past. The dry lakes have margins or rims and a radar brightness similar to the rest of the surrounding terrain, making them appear devoid of liquid.

-The varying states of how full the lakes are suggest that lakes in this region of Titan might be temporary on some unknown timescale.

-Approximately 15 of the dark patches seem filled and show no clear evidence of erosion. These dark patches resemble terrestrial lakes confined within impact basins (for example, Clearwater Lakes in Canada) or within volcanic calderas (for example, Crater Lake, Oregon). The nest-like nature of these lakes and their limited range of sizes make it unlikely that they originated from an impact. A volcanic origin for the depressions is possible, given their appearance. 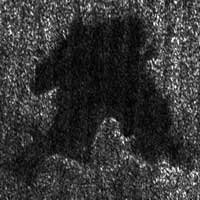 -Some lakes have steep margins and very distinct edges, suggesting a topographic rim. These lakes are consistent with seepage or groundwater drainage lakes.

-Other lakes have diffuse, more scalloped edges, with a gradual decrease in radar brightness towards the center of the lake. These lakes are more likely to be associated with channels, and may be either drainage lakes or groundwater drainage lakes.

-Yet other lakes have curvy channel-like extensions, similar in appearance to terrestrial flooded river valleys (for example Lake Powell).

-Bright patches near the lake edges could be small islands peeking through the surface. Floating “icebergs” are unlikely because most materials would not float in liquid hydrocarbons.

-Based on the lake characteristics, Cassini scientists think they are observing liquid-filled lakes on Titan today. Another possibility is that these depressions and channels formed in the past and have now been filled by a low-density deposit that is darker than any observed elsewhere on Titan. However, the absence of wind-blown features in this area makes the low-density hypothesis unlikely.

-These northern hemisphere lakes are the strongest evidence yet that Titan's surface and atmosphere have an active hydrological cycle, though with a condensable liquid other than water. In this cycle, lakes are filled through methane rainfall or intersect with a subsurface layer saturated with liquid methane.

-As Titan's seasons progress over the 29-year cycle of Saturn's orbit around the sun, lakes in the winter hemisphere should expand by steady methane rain, while summer hemisphere lakes shrink or dry up entirely.