Cassini Views Dione, a Frigid Ice World
Sitting in the tranquility of space is the pale moon Dione, looking as if it's posing for a painter. The moon is set against the stunning backdrop of Saturn, adorned in gold and draped with hues of blue. 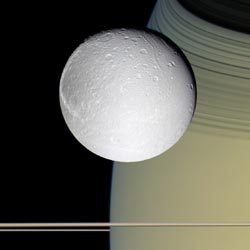 Breathtaking views and a movie of the icy world are now available at http://saturn.jpl.nasa.gov and http://www.nasa.gov/cassini .

During the Cassini spacecraft's only close flyby of the grayish moon, on Oct. 11, 2005, the spacecraft came within 500 kilometers (310 miles) of the surface.

Like most of its counterparts in the Saturnian system, Dione shows a heavily cratered surface. It has a signature style all its own that includes streaky terrains dominating one whole side of the moon. The fine latitudinal streaks appear to crosscut everything and appear to be the youngest feature type in this region of Dione. These striking cracks and fractures are caused by tectonic activity.

"Dione seems to be an older sibling of Enceladus," said Dr. Bonnie Buratti, scientist on the Cassini visual and infrared mapping spectrometer team at NASA's Jet Propulsion Laboratory, Pasadena, Calif. "We think that the cracked features of Dione may be the older version of the tiger stripes on Enceladus. Enceladus is the up-and-coming moon, complete with a recently active history, while Dione is the older, more mature moon."

The Cassini infrared spectrometer team is working on compositional maps of the moon's surface.

Multiple generations of fractures are visible on Dione. Numerous fine, roughly parallel grooves run across the terrain and are interrupted by the larger, irregular, bright fractures. In several places, fractures postdate some deposits in the bottoms of craters.

The Cassini ultraviolet imaging spectrograph team reports the detection of water ice on the surface of Dione and also finds striking brightness variations across the surface. This could be the result of cracks and fractures in the ice. "The ice in the fractures appears to be different than in the surrounding terrain. This may be due to the grain size variations," said Dr. Amanda Hendrix, Cassini scientist at JPL.

As on other Saturnian moons, rockslides on Dione may reveal cleaner ice, while the darker materials accumulate in areas of lower topography, such as crater floors and the bases of scarps.

Scientists on the Cassini fields and particles instruments note that early results do not support the presence of an atmosphere. Dione orbits Saturn within the broad, tenuous E-ring. Hence, scientists will be looking to see if Dione, like Enceladus, is a source of material in the E-ring. They also seek to learn whether the E-ring is affecting Dione's surface. Over the coming months, scientists will begin to piece together a more detailed story of Dione.

Following the rendezvous with Dione, Cassini captured its best views ever of the tiny moon Telesto. "Telesto was too small in Voyager images to see detail on the surface. Cassini has given us the best views of the potato-shaped chunk of ice," said Dr. Candice Hansen, Cassini scientist at JPL. Early results indicate the entire moon, roughly 24 kilometers across (15 miles), is ice.

Next up for Cassini, on Oct. 28, is a close pass of Titan, Saturn's largest moon. During this pass Cassini's powerful radar will be pointed to image the Huygens probe landing site and surrounding terrain.