Saturn's Rings May be Old Timers 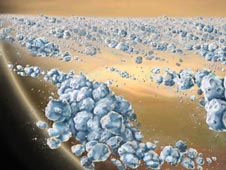 This is an artist concept of a close-up view of Saturn's ring particles. Image credit: NASA/JPL/University of Colorado
› Full image and caption
SAN FRANCISCO, Calif. – New observations by NASA's Cassini spacecraft indicate the rings of Saturn, once thought to have formed during the age of the dinosaurs, instead may have been created roughly 4.5 billion years ago, when the solar system was still under construction.

Larry Esposito, principal investigator for Cassini's Ultraviolet Imaging Spectrograph at the University of Colorado, Boulder, said data from NASA's Voyager spacecraft in the 1970s, and later from NASA's Hubble Space Telescope, led scientists to believe Saturn's rings were relatively youthful and likely created by a comet that shattered a large moon, perhaps 100 million years ago.

But ring features seen by instruments on Cassini -- which arrived at Saturn in 2004 -- indicate the rings were not formed by a single cataclysmic event. The ages of the different rings appear to vary significantly, and the ring material is continually being recycled, Esposito said.

"The evidence is consistent with the picture that Saturn has had rings all through its history," said Esposito of the University of Colorado's Laboratory for Atmospheric and Space Physics. "We see extensive, rapid recycling of ring material, in which moons are continually shattered into ring particles, which then gather together and re-form moons."

Esposito and colleague Miodrag Sremcevic, also with the University of Colorado, are presenting these findings today in a news briefing at the meeting of the American Geophysical Union in San Francisco.

"We have discovered that the rings probably were not created just yesterday in cosmic time, and in this scenario, it is not just luck that we are seeing planetary rings now," said Esposito. "They probably were always around but continually changing, and they will be around for many billions of years."

Scientists had previously believed rings as old as Saturn itself should be darker due to ongoing pollution by the "infall" of meteoric dust, leaving telltale spectral signatures, Esposito said. But the new Cassini observations indicate the churning mass of ice and rock within Saturn's gigantic ring system is likely much larger than previously estimated. This helps explain why the rings overall appear relatively bright to ground-based telescopes and spacecraft.

"The more mass there is in the rings, the more raw material there is for recycling, which essentially spreads this cosmic pollution around," he said. "If this pollution is being shared by a much larger volume of ring material, it becomes diluted and helps explain why the rings appear brighter and more pristine than we expected."

Esposito, who discovered Saturn's faint F ring in 1979 using data from NASA's Pioneer 11 spacecraft, said a paper by him and his colleagues appearing in an upcoming issue of the journal Icarus supports the theory that Saturn's ring material is being continually recycled. Observing the flickering of starlight passing through the rings in a process known as stellar occultation, the researchers discovered 13 objects in the F ring ranging in size from 27 meters to 10 kilometers (30 yards to six miles) across.

Since most of the objects were translucent -- indicating at least some starlight was passing through them -- the researchers concluded they probably are temporary clumps of icy boulders that are continually collecting and disbanding due to the competing processes of shattering and coming together again. The team tagged the clumpy moonlets with cat names like "Mittens" and "Fluffy" because they appear to come and go unexpectedly over time and have multiple lives, said Esposito.

Esposito stressed that Saturn's rings of the future won't be the same rings we see today, likening them to great cities around the world like San Francisco, Berlin or Beijing. "While the cities themselves will go on for centuries or millennia, the faces of people on the streets will always be changing due to continual birth and aging of new citizens."

The Cassini-Huygens mission is a cooperative project of NASA, the European Space Agency and the Italian Space Agency. The Jet Propulsion Laboratory, a division of the California Institute of Technology in Pasadena, manages the mission for NASA's Science Mission Directorate in Washington, D.C.

For more information about the Cassini-Huygens mission, visit: http://saturn.jpl.nasa.gov and http://www.nasa.gov/cassini. To listen to a podcast of Esposito and view a short video animation of objects in Saturn's F ring shattering and re-forming, visit: http://www.colorado.edu/news/reports/space/.