Images of Saturn's Small Moons Tell the Story of Their Origins 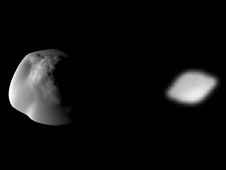 The highest resolution images of Pan (right) and Atlas (left) reveal distinctive "flying saucer" shapes created by prominent equatorial ridges not seen on the other small moons of Saturn. Image credit: NASA/JPL/Space Science Institute
› Full image and caption
Imaging scientists on NASA's Cassini mission are telling a tale of how the small moons orbiting near the outer rings of Saturn came to be. The moons began as leftover shards from larger bodies that broke apart and filled out their "figures" with the debris that made the rings.

It has long been suspected that Saturn's rings formed in the disintegration of one or several large icy bodies, perhaps pre-existing moons, by giant impacts. The resulting debris quickly spread and settled into the equatorial plane to form a thin disk surrounding the planet. And the small, irregularly shaped ring-region moons were believed to be the leftover pieces from this breakup.

Now, several years' worth of cosmic images of Saturn's 14 known small moons have been used to derive the sizes and shapes of most of them, and in about half the cases, even masses and densities. This information, published in the Dec. 7 issue of the journal Science, has led to new insights into how some of these moons may have formed.

The tip-off was the very low density of the inner moons, about half that of pure water ice, and sizes and shapes that suggested they have grown by the accumulation of ring material. The trouble was, these moons are within and near the rings, where it is not possible for small particles to fuse together gravitationally. So how did they do it? They got a jump start.

"We think the only way these moons could have reached the sizes they are now, in the ring environment as we now know it to be, was to start off with a massive core to which the smaller, more porous ring particles could easily become bound," said Carolyn Porco, Cassini imaging team leader from the Space Science Institute in Boulder, Colo. Porco is the lead author of the first of two related articles published in this week's issue of Science. 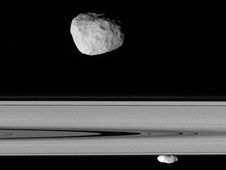 Janus appears above Saturn's rings and Prometheus, more elongated, is below the rings. Image credit: NASA/JPL/Space Science Institute
› Full image and caption Simple calculations and more complicated computer simulations have shown that ring particles will readily become bound to a larger seed having the density of water ice. By this process, a moon will grow even if it is relatively close to Saturn. The result is a ring-region moon about two to three times the size of its dense ice core, covered with a thick shell of porous, icy ring material. To make a 30-kilometer moon (19 miles) requires a seed of about 10 kilometers (6 miles).

Where did such large cores come from? And when did this all take place?

"The core may in fact be one of the remnants from the original ring-forming event," said co-author Derek Richardson, professor of astronomy at the University of Maryland, College Park, "which might have been left intact all this time and protected from additional collisional breakup by the mantle of ring particles around it."

Just exactly when the rings formed is not known. "But it is not out of the question that the moons date back to the time of ring formation," said Porco.

The researchers show that the cores of Pan and Daphnis, which orbit within gaps in the outer A ring, were large enough to open narrow gaps. Accretion, or accumulation of material, they say, probably occurred quickly. The moons grew and their gaps widened, achieving their present sizes before the gaps were completely emptied of material, and probably before the local rings reached their present thickness.

So how did Pan in the main rings, and Atlas, which orbits just beyond the outer edge of the main rings, get the prominent equatorial ridges that make them look like flying saucers? The second paper reports evidence for a secondary stage of accretion that occurred after the moons' growth was completed and after the rings flattened to their present 20-meter (66 feet) thickness.

"Our computer simulations show that the ridges must have accreted rapidly when Saturn's rings were thin, forming small accretion disks around the equators of Pan and Atlas," said Sebastien Charnoz, lead author and an associate of imaging team member Andre Brahic at the University Paris-Diderot and CEA Saclay, in France. "The ridges might be the remains of 'fossilized' accretion disks, fundamental structures seen at all scales in the universe, from planetary rings to galaxies."