To celebrate this special occasion, the mission's imaging team is releasing today a spate of captivating new images and movies of the ringed planet and some of its most photogenic companions. 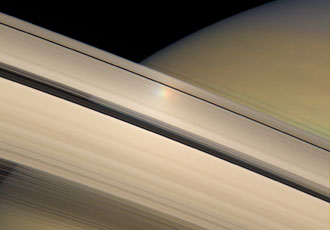 Image right: The opposition effect, a brightness surge that is visible on Saturn's rings when the sun is directly behind the spacecraft, is captured here as a colorful halo of light moving across Saturn's sunlit rings. Image credit: NASA/JPL/Space Science Institute

Headlining this bounty are two expansive and stunning natural color mosaics of Saturn and its rings. One of these is the view seen by the spacecraft as it looked back towards Saturn from its close encounter with the moon Iapetus last month, and shows the shadow-draped planet surrounded by its rings and many of its major icy moons. Another view peers down onto the planet's swirling blue and gold clouds and its splendid rings from a vantage point high above Saturn's equator.

Along with several other colorful views of the planet, there are dramatic vistas (including one stereo image, or anaglyph) of the cratered faces of a few of the planet's icy moons, a high resolution survey of the main ring system in natural color, colorful glimpses of Titan and an updated black-and-white map of Titan's surface.

Two exciting movies from Cassini also make their debut today. One sequence shows the detailed motions of the F-ring as its shepherd moon Prometheus approaches the ring, draws material from it, and gouges a channel in the dust-sized material remaining there.

But by far the most thrilling offering of all is a breathtaking flyover movie of the awesome 10-kilometer (6-mile) high equatorial ridge on Iapetus, acquired when Cassini was only a few thousand kilometers about the surface.

Imaging team leader Carolyn Porco at CICLOPS in Boulder Colorado said, "To the thousands upon thousands of fellow explorers who have traveled along with us since we departed Earth 10 years ago today, who have followed our adventures across the solar system and into orbit around Saturn and who have since been as awestruck as we have at our findings there, we say, 'Happy Anniversary! It's been a pleasure flying with you.'"

The Cassini-Huygens mission is a cooperative project of NASA, the European Space Agency and the Italian Space Agency. The Jet Propulsion Laboratory (JPL), a division of the California Institute of Technology in Pasadena, manages the Cassini-Huygens mission for NASA's Science Mission Directorate, Washington. The Cassini orbiter and its two onboard cameras were designed, developed and assembled at JPL. The imaging team consists of scientists from the U.S., England, France, and Germany. The imaging operations center and team leader (Dr. C. Porco) are based at the Space Science Institute in Boulder, Colo.