Cassini Pinpoints Hot Sources of Jets on Enceladus
The following is republished with permission from the Space Science Institute.

A recent analysis of images from NASA's Cassini spacecraft provides conclusive evidence that the jets of fine, icy particles spraying from Saturn's moon Enceladus originate from the hottest spots on the moon's "tiger stripe" fractures that straddle the moon's south polar region.

Members of Cassini's imaging team used two years' worth of pictures of the geologically active moon to locate the sources of the most prominent jets spouting from the moon's surface. They then compared these surface source locations to hot spots detected by Cassini on Enceladus in 2005. The new results are published in the Oct. 11, 2007, issue of the journal Nature. 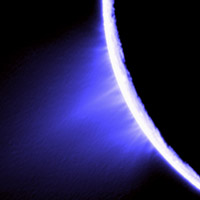 The researchers found that all of the jets appear to come from the four prominent tiger stripe fractures in the moon's active south polar region and, in almost every case, in the hottest areas detected by Cassini's composite and infrared spectrometer.

"This is the first time the visible jets have been tied directly to the tiger stripes," said Joseph Spitale, an imaging team associate and lead author of the Nature paper. Spitale works with Cassini imaging team leader and co-author Carolyn Porco, at the Space Science Institute in Boulder, Colo.

Imaging scientists suspected the individual jets, which collectively feed a plume that towers thousands of kilometers, or miles, above the moon, had been coming from the tiger stripes since the first images of the jets were taken in 2005. But this work provides the first conclusive proof of that hypothesis and provides the first direct evidence of a causal connection between the jets and the unusual heat radiating from the fractures.

To identify the jets' surface locations with certainty, the researchers carefully measured the apparent position and orientation of each jet as observed along the moon's edge by the spacecraft. By making measurements taken from a variety of viewing directions, they were able to pinpoint the jets' sources.

What Spitale and Porco found was intriguing: all measured jets fell on a fracture, but not all jets fell on a previously discovered hot spot. They conclude there are other hot spots to be found. "Some of our sources occur in regions not yet observed by Cassini's composite infrared spectrometer," said Spitale. "So we are predicting that future Cassini observations of those locations will find elevated temperatures."

The scientists also report the suggestion that the characteristics of the jets may depend on tidal frictional heating within the fractures and its variation over a full Enceladus orbit around Saturn. However, more work remains in investigating this issue.

The possibility, first suggested by the imaging team, that the jets may erupt from pockets of liquid water, together with the unusually warm temperatures and the organic material detected by Cassini in the vapor accompanying the icy particles, immediately shoved this small Saturnian moon into the spotlight as a potential solar system habitable zone.

But what actually lies beneath the surface to power the jets remains a mystery.

"These are findings with tremendously exciting implications and to say that I am eager to get to the bottom of it would be a cosmic understatement," said Porco. "Do the jets derive from near-surface liquid water or not? And if not, then how far down is the liquid water that we all suspect resides within this moon? Personally, I'd like to know the answer yesterday!"

The next opportunity for answering these questions will be when Cassini dips low over Enceladus and flies through the plumes in March 2008, obtaining additional data about its chemical composition and the nature of its jets.

A newly processed Cassini image of the jets, and a map of the south polar region showing the correlations between jets and hot spots, can be found at http://saturn.jpl.nasa.gov, http://www.nasa.gov/cassini and http://ciclops.org .