Saturn's Old Moon Iapetus Retains Its Youthful Figure
Saturn's distinctive moon Iapetus (eye-APP-eh-tuss) is cryogenically frozen in the equivalent of its teenage years. The moon has retained the youthful figure and bulging waistline it sported more than three billion years ago, scientists report. 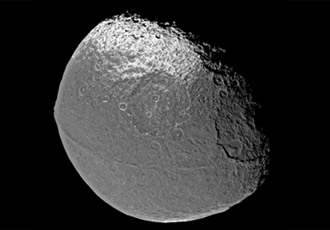 Unlike any other moon in the solar system, Iapetus is the same shape today as it was when it was just a few hundred million years old; a well-preserved relic from the time when the solar system was young. These results appear in the online version of the journal Icarus.

Cassini flew by Iapetus in early 2005 and discovered the moon had a walnut shape, bulging at its midsection. On top of that it has a chain of mountains located exactly along its equator.

"We've modeled how Iapetus formed its big, spin-generated bulge and why its rotation slowed down to its present nearly 80-day period. As an unexpected bonus, Iapetus also told us how old it was," said Dennis Matson, Cassini project scientist at JPL. "You would expect a very fast-spinning moon to have this bulge, but not a slow-spinning moon, because the bulge would have been much flatter."

Scientists calculate Iapetus originally rotated much faster--at least five hours, but less than 16 hours per revolution. The fast spin gave the moon an oblate shape that increased the surface area (in the same way the surface area of a round balloon stretches when the balloon is pressed into an oblate shape). By the time the rotation slowed down to a period of 16 hours, the outer shell of the moon had frozen. Furthermore, the surface area of the cold moon was now smaller. The excess surface material was too rigid to go back smoothly into the moon. Instead, it piled up in a chain of mountains at the equator.

"Iapetus' development literally stopped in its tracks," said Castillo. "In order for tidal forces to slow Iapetus to its current spin rate, its interior had to be much warmer, close to the melting point for water ice."

The challenge in developing a model of how Iapetus came to be "frozen in time" has been in deducing how it ever became warm enough to form a bulge in the first place, and figuring out what caused the heat source to turn off, leaving Iapetus to freeze.

The heat source had to have a limited life span, to allow the moon's crust to rapidly become cold and retain its immature shape. After looking at several models, scientists concluded that the heat came from its rocks, which contain short-lived radioactive isotopes aluminum-26 and iron-60 (which decay very rapidly on a geologic timescale). Since these elements decay at a known rate, this allowed scientists to "carbon date" Iapetus by using aluminum-26 instead of carbon. Scientists calculate the age of Iapetus to be roughly 4.564 billion years old.

"This is the first direct evidence of the early spin history for a satellite in the outer solar system. It teaches us more about how the speed of a body's rotation influenced its evolution, and broadens our knowledge of the early history of outer planet satellites," said Matson.

More information on the Cassini mission is available at: http://saturn.jpl.nasa.gov and http://www.nasa.gov/cassini .