Cassini Finds Saturn Moons Are Active
Saturn's moons Tethys and Dione are flinging great streams of particles into space, according to data from the Cassini mission to Saturn. The discovery suggests the possibility of some sort of geological activity, perhaps even volcanic, on these icy worlds.

These results appear in this week's issue of the journal Nature. The Cassini mission is a cooperative project of NASA, the European Space Agency and the Italian Space Agency. 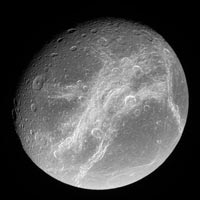 The particles were traced to the two moons because of the dramatic outward movement of electrically charged gas, which could be mapped back to the moons' orbits in the magnetic environment of Saturn. Known as plasma, the gas is composed of negatively charged electrons and positively charged ions, which are atoms with one or more electrons missing. Because they're charged, the electrons and ions can become trapped inside a magnetic field.

Saturn rotates in just 10 hours and 46 minutes. This sweeps the magnetic field and the trapped plasma through space. Just like a child on a fast-spinning merry-go-round, the trapped gas feels a force trying to throw it outwards, away from the center of rotation.

Soon after the Cassini spacecraft reached Saturn in June 2004, its instruments revealed that the planet's hurried rotation squashes the plasma into a disc, and that great fingers of gas are being thrown out into space from the disc's outer edges. Hotter, more tenuous plasma then rushes in to fill the gaps. 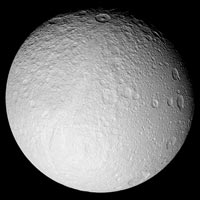 Now, Jim Burch, team member of the Cassini Plasma Spectrometer at the Southwest Research Institute, San Antonio, Texas, and his colleagues have made a careful study of these events using the instrument. They have found that the direction of the ejected electrons points back towards Tethys and Dione. "It establishes Tethys and Dione as important sources of plasma in Saturn's magnetosphere," said Burch.

Until this discovery, the only moons of Saturn known to be active worlds were Titan and Enceladus. "This new result seems to be a strong indication that there is activity on Tethys and Dione as well," said Andrew Coates from the Mullard Space Science Laboratory, University College London, co-author and member of the Cassini Plasma Spectrometer team.

Activity is a draw for planetary scientists, as it means that the planet has yet to become geologically dead or is perhaps being supplied with energy. The activity on Enceladus was detected first by Cassini's Dual Technique Magnetometer. This led the flight team to schedule a particularly close pass of Enceladus, which revealed a wealth of data about Enceladus' alien geysers - and spectacular pictures, too.

"The best results arise when we combine a variety of data sets to understand the observations," said Michele Dougherty, Imperial College, London, who is principal investigator of the magnetometer.

Future flybys of Dione and Tethys will allow the magnetometer team and the other instrument teams a close-up look at the moons. Before that happens, the teams have to go back and search for further signs of activity in the data already collected during the Tethys and Dione flybys of 2005.

In addition, having detected the electrons, they will try to determine the composition of the Tethys and Dione plasma using ion data.

The Cassini-Huygens mission is a cooperative project of NASA, the European Space Agency and the Italian Space Agency. The Jet Propulsion Laboratory, a division of the California Institute of Technology in Pasadena, manages the Cassini-Huygens mission for NASA's Science Mission Directorate, Washington. The Cassini orbiter was designed, developed and assembled at JPL. The Cassini Plasma Spectrometer team is based at the Southwest Research Institute in San Antonio. The magnetometer team is based at Imperial College in London, working with team members from the United States and several European countries.