Frictional Heating Explains Plumes on Enceladus
Pasadena, Calif.--Rubbing your hands together on a cold day generates a bit of heat, and the same process of frictional heating may be what powers the geysers jetting out from the surface of Saturn's moon Enceladus.

Tidal forces acting on fault lines in the moon's icy shell cause the sides of the faults to rub back and forth against each other, producing enough heat to transform some of the ice into plumes of water vapor and ice crystals, according to a new study published in the May 17 issue of the journal Nature. 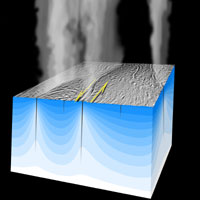 Francis Nimmo, assistant professor of Earth and planetary sciences at the University of California, Santa Cruz, and his co-authors calculated the amount of heat that could be generated by this mechanism and concluded that it is the most likely explanation for the plumes and other features observed in the south polar region of Enceladus. This region is warmer than the rest of the frozen surface of Enceladus and has features called "tiger stripes" that look like tectonic fault lines.

Driving the whole process is the moon's eccentric orbit, which brings it close to Saturn and then farther away, so that the gravitational attraction it feels changes over time.

"It's getting squeezed and stretched as it goes around Saturn, and those tidal forces cause the faults to move back and forth," Nimmo said.

Unlike some other proposals for the origin of the plumes, this mechanism does not require the presence of liquid water near the surface of Enceladus, noted co-author Robert Pappalardo of NASA's Jet Propulsion Laboratory in Pasadena, Calif.

"The heat is sufficient to cause ice to sublimate, like in a comet -- the ice evaporates into vapor, and the escaping vapor drags particles off into space," Pappalardo said.

The frictional, or "shear heating," mechanism is consistent with an earlier study by Nimmo and Pappalardo which proposed that Enceladus reoriented itself to position its hot spot at the south pole (see earlier press release at http://press.ucsc.edu/text.asp?pid=878). In that study, the researchers described how the reorientation of Enceladus would result from a lower density of the thick ice shell in this region.

In the new paper, the researchers estimated the thickness of the ice shell to be at least 5 kilometers (3 miles) and probably several tens of kilometers or miles. They also estimated that the movement along the fault lines is about half a meter over the course of a tidal period.

In addition to Nimmo and Pappalardo, the co-authors of the paper include John Spencer of the Southwest Research Institute in Boulder, Colo., and McCall Mullen of the University of Colorado, Boulder. This study was funded by NASA's Planetary Geology and Geophysics and Outer Planets research programs.

Enceladus has sparked great interest among scientists, particularly since the discovery more than a year ago by NASA's Cassini spacecraft of the geysers shooting off its surface. This is one of two papers about Enceladus appearing in the May 17 issue of Nature. In the other paper, scientists explain how cracks in the icy surface of Enceladus open and close under Saturn's pull. Saturn's tides could control the timing of the geyser's eruptions, researchers suggest.

More information on the Cassini mission is available at http://www.nasa.gov/cassini and http://saturn.jpl.nasa.gov .