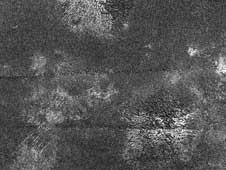 Hills with a wrinkly radial pattern stand out in a new radar image captured by NASA's Cassini spacecraft on Dec. 28, 2009.

The grooved mounds in the picture, which are located in a northern hemisphere region known as Belet, are about 80 kilometers (50 miles) wide and about 60 meters (200 feet) high.

The shapes of these landscape features have not been seen on Titan before, though they bear similarity to spidery features known as coronae on Venus. A corona is a circular to elliptical feature thought to result from the flow of heat in a planet's interior.

Like forensic scientists, radar team members are trying to sleuth out what created these lines and hills on Titan.

"This star-shaped pattern of the hills indicates something significant happening in the middle of the star," said Steve Wall of NASA's Jet Propulsion Laboratory, Pasadena, Calif., a Cassini scientist on the radar team. "It might be caused by tectonic forces, such as the forces that pull the crust of a planet apart, or rainfall that leads to erosion, or an ice intrusion like a dike."

All of these forces produce grooves on Earth's surface, but Wall says the radar team is not yet sure what is happening on Titan.