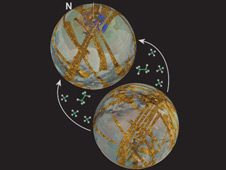 The northern and southern hemispheres of Titan, showing the great disparity between the abundance of lakes in the north and their paucity in the south. The hypothesis presented favors long-term flux of volatile hydrocarbons, predominantly methane, from hemisphere to hemisphere. Recently, the direction of transport has been from south to north, but the effect would have reversed tens of thousands of years ago. Credit: NASA/JPL/Caltech/UA/SAR
Larger image

PASADENA, Calif. -- Researchers at the California Institute of Technology, NASA's Jet Propulsion Laboratory, and other institutions suggest that the eccentricity of Saturn's orbit around the sun may be responsible for the unusually uneven distribution of lakes over the northern and southern polar regions of the planet's largest moon, Titan. A paper describing the theory appears in the Nov. 29 advance online edition of Nature Geoscience.

Saturn's oblong orbit around the sun exposes different parts of Titan to different amounts of sunlight, which affect cycles of precipitation and evaporation in those areas. Similar variations in Earth's orbit also drive long-term ice-age cycles on our planet.

As revealed by Synthetic Aperture Radar imaging data from NASA's Cassini spacecraft, liquid methane and ethane lakes in Titan's northern high latitudes cover 20 times more area than lakes in the southern high latitudes. The Cassini data also show there are significantly more partially filled and now-empty lakes in the north. (In the radar data, smooth features -- like the surfaces of lakes -- appear as dark areas, while rougher features -- such as the bottom of an empty lake-appear bright.) The asymmetry is not likely to be a statistical fluke because of the large amount of data collected by Cassini in its five years surveying Saturn and its moons.

Scientists initially considered the idea that "there is something inherently different about the northern polar region versus the south in terms of topography, such that liquid rains, drains or infiltrates the ground more in one hemisphere," said Oded Aharonson of Caltech, lead author of the Nature Geoscience paper.

However, Aharonson notes that there are no substantial known differences between the north and south regions to support this possibility.  Alternatively, the mechanism responsible for this regional dichotomy may be seasonal. One year on Titan lasts 29.5 Earth years. Every 15 Earth years, the seasons of Titan reverse, so that it becomes summer in one hemisphere and winter in the other. According to this seasonal variation hypothesis, methane rainfall and evaporation vary in different seasons -- recently filling lakes in the north while drying lakes in the south.

The problem with this idea, Aharonson said, is that it accounts for decreases of about one meter per year in the depths of lakes in the summer hemisphere. But Titan's lakes are a few hundred meters deep on average, and wouldn't drain (or fill) in just 15 years.  In addition, seasonal variation can't account for the disparity between the hemispheres in the number of empty lakes. The north polar region has roughly three times as many dried-up lake basins as the south and seven times as many partially filled ones.

"How do you move the hole in the ground?" Aharonson asked. "The seasonal mechanism may be responsible for part of the global transport of liquid methane, but it's not the whole story."  A more plausible explanation, say Aharonson and his colleagues, is related to the eccentricity of the orbit of Saturn -- and hence of Titan, its satellite -- around the sun.

"We propose that, in this orbital configuration, the difference between evaporation and precipitation is not equal in opposite seasons, which means there is a net transport of methane from south to north," said Aharonson. This imbalance would lead to an accumulation of methane -- and hence the formation of many more lakes -- in the northern hemisphere.

This situation is only true right now, however. Over very long time scales of tens of thousands of years, Saturn's orbital parameters vary, at times causing Titan to be closer to the sun during its northern summer and farther away in southern summers, and producing a reverse in the net transport of methane. This should lead to a buildup of hydrocarbon -- and an abundance of lakes -- in the southern hemisphere.

"Like Earth, Titan has tens-of-thousands-of-year variations in climate driven by orbital motions," Aharonson said. On Earth, these variations, known as Milankovitch cycles, are linked to changes in solar radiation, which affect global redistribution of water in the form of glaciers, and are believed to be responsible for ice-age cycles. "On Titan, there are long-term climate cycles in the global movement of methane that make lakes and carve lake basins. In both cases we find a record of the process embedded in the geology," he added.

"We may have found an example of long-term climate change, analogous to Milankovitch climate cycles on Earth, on another object in the solar system," he said.

For more information about the Cassini-Huygens mission, visit: http://www.nasa.gov/cassini or http://saturn.jpl.nasa.gov/index.cfm .  The Cassini-Huygens mission is a cooperative project of NASA, the European Space Agency and the Italian Space Agency.  JPL, a division of the California Institute of Technology in Pasadena, manages the mission for NASA's Science Mission Directorate in Washington, D.C.