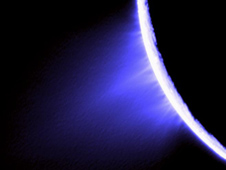 PASADENA, Calif. -- For the first time, scientists working on NASA's Cassini mission have detected sodium salts in ice grains of Saturn's outermost ring. Detecting salty ice indicates that Saturn's moon Enceladus, which primarily replenishes the ring with material from discharging jets, could harbor a reservoir of liquid water -- perhaps an ocean -- beneath its surface.

Cassini discovered the water-ice jets in 2005 on Enceladus. These jets expel tiny ice grains and vapor, some of which escape the moon's gravity and form Saturn's outermost ring. Cassini's cosmic dust analyzer has examined the composition of those grains and found salt within them.

"We believe that the salty minerals deep inside Enceladus washed out from rock at the bottom of a liquid layer," said Frank Postberg, Cassini scientist for the cosmic dust analyzer at the Max Planck Institute for Nuclear Physics in Heidelberg, Germany. Postberg is lead author of a study that appears in the June 25 issue of the journal Nature.

Scientists on Cassini's cosmic dust detector team conclude that liquid water must be present because it is the only way to dissolve the significant amounts of minerals that would account for the levels of salt detected. The process of sublimation, the mechanism by which vapor is released directly from solid ice in the crust, cannot account for the presence of salt.

"Potential plume sources on Enceladus are an active area of research with evidence continuing to converge on a possible salt water ocean," said Linda Spilker, Cassini deputy project scientist at NASA's Jet Propulsion Laboratory in Pasadena, Calif. "Our next opportunity to gather data on Enceladus will come during two flybys in November."

The makeup of the outermost ring grains, determined when thousands of high-speed particle hits were registered by Cassini, provides indirect information about the composition of the plume material and what is inside Enceladus. The outermost ring particles are almost pure water ice, but nearly every time the dust analyzer has checked for the composition, it has found at least some sodium within the particles.

"Our measurements imply that besides table salt, the grains also contain carbonates like soda. Both components are in concentrations that match the predicted composition of an Enceladus ocean," Postberg said. "The carbonates also provide a slightly alkaline pH value. If the liquid source is an ocean, it could provide a suitable environment on Enceladus for the formation of life precursors when coupled with the heat measured near the moon's south pole and the organic compounds found within the plumes."

However, in another study published in Nature, researchers doing ground-based observations did not see sodium, an important salt component. That team notes that the amount of sodium being expelled from Enceladus is actually less than observed around many other planetary bodies. These scientists were looking for sodium in the plume vapor and could not see it in the expelled ice grains. They argue that if the plume vapor does come from ocean water, the evaporation must happen slowly deep underground, rather than as a violent geyser erupting into space.

"Finding salt in the plume gives evidence for liquid water below the surface," said Sascha Kempf, also a Cassini scientist for the cosmic dust analyzer from the Max Planck Institute for Nuclear Physics. "The lack of detection of sodium vapor in the plume gives hints about what the water reservoir might look like."

Determining the nature and origin of the plume material is a top priority for Cassini during its extended tour, called the Cassini Equinox Mission.

"The original picture of the plumes as violently erupting Yellowstone-like geysers is changing," said Postberg."They seem more like steady jets of vapor and ice fed by a large water reservoir. However, we cannot decide yet if the water is currently 'trapped' within huge pockets in Enceladus' thick ice crust or still connected to a large ocean in contact with the rocky core."

The Cassini-Huygens mission is a cooperative project of NASA, the European Space Agency and the Italian Space Agency. The Cassini cosmic dust analyzer was provided by the German Aerospace Center. The Cassini orbiter was designed, developed and assembled at JPL. JPL manages the mission for the Science Mission Directorate at NASA Headquarters in Washington.

More information about the Cassini mission is available at: